This bog cotton is from Glendalough, Co.Wicklow.

This bog cotton is from Glendalough, Co.Wicklow.

The general consensus is that Irish soil quality is good overall.

Soil formation is very complex and differs on a range of factors. One of these is leaching (washing out) and it is prominent in Ireland since the water movement here is mainly downwards, which leaves the soil very acidic. Lime will counter the acidity but, in doing so, can alter soil biodiversity.

Other influences on the formation of soil are texture, organic matter and primary base status, which contribute to the first three soil horizons.

At first everything in Ireland was in the C-horizon and there was little change if lots of clay was present. North Kerry, Clare and Kilkenny are rich in clay; in Leitrim the drumlins are built of glacial clay till. Movement of water is slow here and leads to waterlogged soil often called gley soil. There is high clay content in this type of soil. Rushes thrive in this environment, and it can still be used for rough grazing of animals. There are two types in Ireland - surface water gley and ground water gley.

At higher levels, where the climate is colder and wetter, a thin layer of plant debris started the process of peat soil. This provided the bases from which peat bogs later developed. This soil is wet and acidic by nature and is usually identified as raised or blanket bogs, with turf as the byproduct. A lot of plants find it hard to grow in peaty soil but bog cotton, heather and coniferous trees do manage to lay roots. Growing crops is not really an option is this soil, which is found in the midlands and also in many parts of the west, north and south of Ireland.

Grey-brown soil is so-called because of its colour - light above, dark below. They are widely developed in the midlands, where they form very fertile land. Linked to this is pseudo grey-brown soil, which is rich in clay and is near the surface.

There is continual increasing pressure on soil, particularly from land use changes, intensification of agriculture, erosion and overgrazing, afforestation, industry and urbanisation. 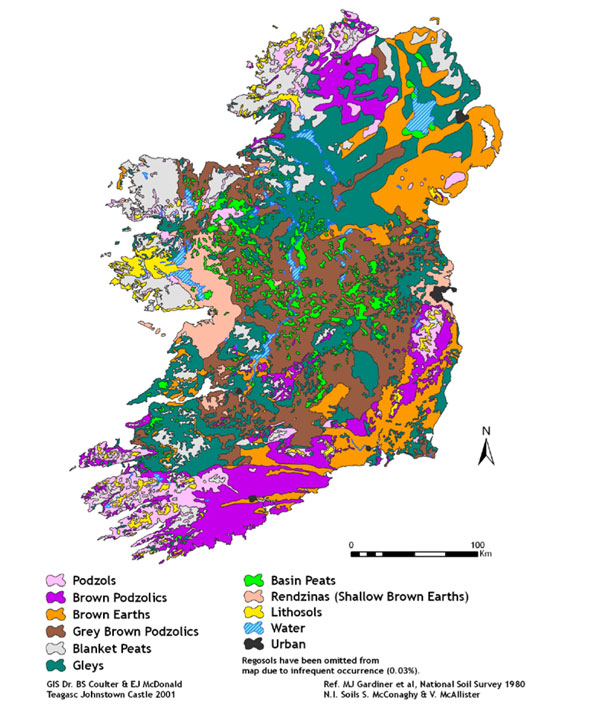 Previous - Changes to Hedgerows
Next - Soil and biodiversity