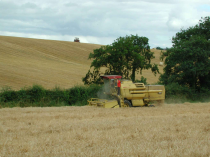 Over use of heavy machinery can lead to soil mismanagement and a loss of biodiversity in an area.

Over use of heavy machinery can lead to soil mismanagement and a loss of biodiversity in an area.

All agriculture depends essentially on biodiversity. Irish agriculture has a plus point in that 90% of our land is grassland, which in itself is a good protector of soil and of soil biodiversity. Yet it is still threatened by a growing loss of biodiversity. Intensive farming can lead to a loss in important habitat like hedgerows. Intensive farming uses more pesticides and fertilisers, multiple cropping and heavy machinery. Less time is now spent tending to the land to make it fertile while changes in our climate are also adding to the loss. 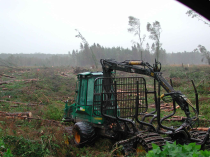 Logging can be a cause of biodiversity loss in forests.

Logging can be a cause of biodiversity loss in forests.

Climate change, the energy agenda and biodiversity are increasingly impacting on forestry policies throughout the world. As forests are reservoirs of carbon, providers of habitats and sources of renewable fuel, the need for sustainable forest management has never been greater. However, forest biodiversity is increasingly threatened as a result of deforestation, fragmentation, climate change, conversion to agricultural land, overgrazing and pollution.

In Ireland, The Draft Forestry Programme 2014-2020 is focused on how best to conserve and enhance biodiversity in Irish forests, through appropriate planning, conservation and management. It requires approximately 15% of the forest area to be treated with particular regard to biodiversity. For more information, read the report here.

Freshwater and marine habitats face similar threats, yet there are some differences regarding the severity of each threat. Overfishing of certain species like cod is having an effect on their numbers. Other threatening elements include disturbance of an estuary (including dredging and dumping), agricultural runoff, industrial pollution and exploitation of spawning adult fish as bait. Climate change leading to rising water temperatures also has a negative effect.

Previous - Amendment to the Heritage Bill
Next - Life and biodiversity