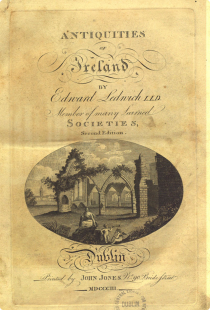 Copy of a title page of Antiquities of Ireland written by Edward Ledwich and first published in 1790. This second edition was published in 1804.

Copy of a title page of Antiquities of Ireland written by Edward Ledwich and first published in 1790. This second edition was published in 1804.

Edward Lewich (1737?–1823), born in Dublin, was an Irish historian, antiquarian and topographer. Having received his MA (1760) and LBB (1763) at Trinity College Dublin he became he became vicar of Aghaboe in Ossory (1772). In 1779 he became one of the founding members of the Hibernian Antiquarian Society (a predecessor to the Royal Irish Academy) which dissolved in 1783 due to internal disagreements. He would later act as secretary of the committee of antiquities at the Royal Irish Academy.

His article on the "History and Antiquities of Irishtown and Kilkenny" forms part of Charles Vallancey's Collectanea de rebus hibernica (1781). The same article is appended to the second edition of his Antiquities of Ireland (1804).

Antiquities of Ireland , originally published in 1790, became of great repute in its day but now holds little authority. However, it is illustrated with numerous engravings depicting castles, abbeys, and round towers, all engraved by J. Ford, for which it is now most highly valued.

Previous - Walsh: Fingal and its Churches
Next - Wakeman: A Survey of Antiquarian Remains On The Island Of Inismurray