Some products that we use everyday pose significant risks to the environment when they are no longer useful while other products are produced in very large quantities or contain some substance that is very scarce.  For those reasons the EU has enacted legislation requiring the producer, importer or seller of such products to take responsibility for them at the end of their useful life.  This is known as producer responsibility and is a very good method of dealing with these highly polluting materials.  Items such as motor cars, tyres, batteries, electrical goods, plastics used in agriculture and packaging of all sorts are dealt with in this way.

When the legislation dealing with packaging waste was enacted in Ireland in 1997, the major industries here established a voluntary scheme, called REPAK, to spread the cost of recovery and recycling of packaging waste across the supply chain. Under this scheme, businesses that produce or sell products pay a fee based on the weight of packaging produced, and this money is subsequently used for collection and recycling of the package material. As can be seen in the chart below, the scheme has been very successful, exceeding its target recovery rate for 2011. 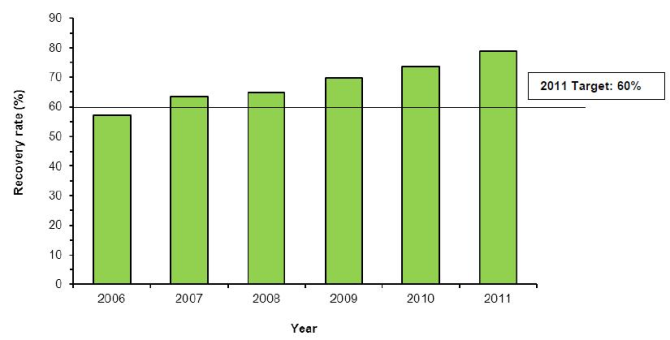 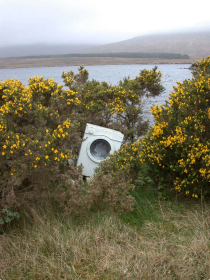 Almost all electrical and electronic equipment contains printed circuit boards, wires, plastics and switches. These components are made up of heavy metals such as mercury, lead, cadmium and chromium; halogenated substances such as chlorofluorocarbons, polychlorinated biphenyls, polyvinyl chloride and brominated flame retardants, as well as asbestos and arsenic.

If electrical items are thrown in the rubbish bin when they stop working these dangerous chemicals will dissolve over time in the landfill and will pose a continuous threat to the environment. Unlike organic matter, a heavy metal does not degrade over time but will remain a heavy metal forever.

Ireland introduced legislation to deal with waste electrical and electronic equipment (WEEE) in 2005, allowing customers to hand back old products when purchasing new ones. The response of the public has been magnificent and 41,092 tonnes of WEEE were collected in Ireland in 2011. However, this is markedly less than the 45,012 tonnes collected in 2010, although the drop may in fact reflect falling consumption of EEE rather than a decrease in the recovery effort: the recovery rate of 7.6 kg per person is still nearly double the target of 4 kg per person specified by the WEEE Directive (EPA, 2013).