Margaret O’Callaghan teaches modern Irish history and politics in the School of Politics , Philosophy and International Studies at the Queen’s University of Belfast . She has also taught at Cambridge University and the University of Notre Dame, Indiana . She has published   on the politics of cultural identity in the Irish Free State,   the politics of the Parnellite period,and British policy towards Ireland between the 1880’s and the Boundary Commission of 1925.Her publications include British High Politics and a Nationalist Ireland; Criminality, Land and the Law under Forster and Balfour (Cork, 1994) ; ‘The Political Position of Women in Independent Ireland’ in    The Field Day Anthology of Irish Writing Vol 5 (2004); ’New ways of looking at the state apparatus and the state archive in nineteenth century Ireland ‘ in Proceedings of the Royal Irish Academy Vol 104c ,2004; and recent articles on   the politics of Irish history-writing, Roger Casement and the British empire and Richard Pigott and the fringe-fenian press. She has also published numerous articles on nationalism and unionism in modern Ireland . She and Professor Mary Daly of UCD have been co-directors of a major north-south research project funded by the Higher Education Authority   on the commemoration of the 1916 Rising in 1966 in both Irish political jurisdictions. Their co-edited book on the politics of the commemoration, 1916 in 1966; Commemorating the Easter Rising was published by the Royal Irish Academy late in 2007. 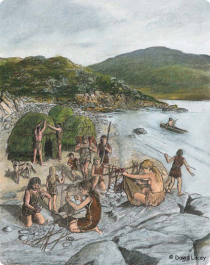 This is an illustration of hunter-gatherers in Ireland, c.9000BC

This is an illustration of hunter-gatherers in Ireland, c.9000BC

It would appear that the earliest inhabitants of Ireland were hunter-gatherers, later supplemented by nomadic farmers who cleared the land. Into the early medieval period, cattle and their seasonal movements governed the nomadic rhythms of life. The ancient sagas of the Fianna, and heroic Irish language narratives of pre-Christian tales, tell us little about early society as such. 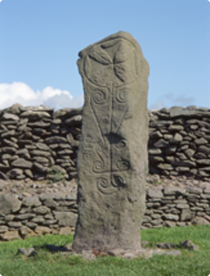 Courtesy of the Department of the Environment, Heritage and Local Government
Enlarge image

Knowledge of Ireland before 3,500 BC is inconclusive. Archaeological research in the past two centuries has attempted to make sense of the stone formations clearly humanly assembled that are scattered across the Irish landscape. Formations like the Poolnabrone dolmen in the Burren of County Clare, court cairns and apparent burial chambers found at the extremities of the Dingle peninsula in Kerry, the startling fort of Dun Angus on the Aran Islands are evidence of very early human settlement with complicated engineering capacities but precise dating is still inconclusive.

Courtesy of the Department of the Environment, Heritage and Local Government
Enlarge image

The most startling achievements of the late Stone Age would appear to be the astonishingly sophisticated passages and chambers set into the ground of the Boyne Valley or Bru na Boinne at Knowth, Dowth and New Grange. These appear to be connected too to the astonishing network of sites that is the complex we call Tara, an extensive range of constructs that seem to indicate the area as a complex centre of construction and human culture. The map of this past is being constantly changed as new road building projects reveal even more complex and layered human settlements, but the controversy between the demands of honouring and discovering a complex past and pushing forward twenty first century road-building is fraught and controversial and encompasses politics at every level. The scale of these constructs is evidence of organisation, hierarchy and skills.

Ordnance and antiquarian researches in the nineteenth century attempted to catalogue, list and describe the extraordinary richness of this early period- in the intervening two centuries over a third of the sites then listed have been destroyed through developments, farmers moving standing stones or simple vandalism.

History may be said to begin with written records, though archaeology and genetic researches have much to tell us. It is unlikely that the population of Ireland a millennium before Christ were Celtic- genetic research seems rather to confirm the notion that the original population may have come from Spain, thus substantiating the allegedly fanciful accounts by bards and later antiquarians that the original Irish were Mil espaigne or Milesians, ‘ out of Spain’. A style of art that we now call La Tene or Celtic is evident however from this period. The earliest recorded indigenous language of Ireland, Irish or Gaelic, was categorised in the nineteenth century by philologists as being of the Celtic branch of the Indo European language category so the concept of ‘the Celtic’ is core to later images of early Ireland reflected through its distinctive art work and reinforced by the categorisations of modern scholars and popularisers. 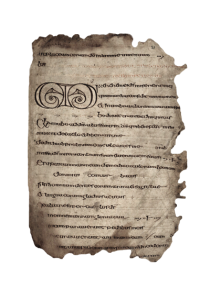 The Cathach / Psalter of St Columba

The Cathach / Psalter of St Columba

The Romans were aware of Ireland as Hibernia or winter, a final winter of the north in their scheme of things, and it does not appear that they landed in Ireland; if they did they left little trace, unlike the complex evidence of conquest in the neighbouring island. Britain, that neighbouring island was to be profoundly entwined with Ireland’s subsequent history and the peculiarities of Britain and its unique global history shaped Ireland in a plethora of ways. Christianity came to Ireland without a Roman conquest and this shaped the distinctive history of the Irish church as monastic. The heroic sagas present the coming of Christianity in tales like the Children of Lir, in the concept of Tir na nOg as disjunctive and frightening, a change partially resisted. The monastic system that emerged gave western Christendom figures like Patrick but also Finian of Clonard, Columba and the anchorite residues at Skellig Micheal, the bleak island off the Kerry coast, and the distinctive beehive huts found from Kerry to Donegal. Irish monks were crucial in preserving Christian faith during the so-called Dark Ages and their settlements throughout Christian Europe testify to this record.

View of the Rock from the north east, with Hore Abbey to the right

View of the Rock from the north east, with Hore Abbey to the right

Irish society incorporated the church into its patronage system; The country was made of territories controlled by powerful families who functioned as regional chiefs and sustained learned classes of ollamhs or judges within the Brehon law system, and fili or poets who created a literature in Irish that celebrated these powerful dynasties. We have written records from this post Christian period and a rich and vibrant written literature supplemented a powerful oral tradition later consigned to print. The Ui Neill or O Neills controlled the north, the Eoganacht in the south were often under threat from their own vassals, the Deisi, from the area around Waterford. The Dal Cais of Clare at one point seized Cormac MacCarthy’s ecclesiastical centre of Cashel, constructed on a vitally important former secular power-centre, and their chief man Brian Boru looked likely at one point to control all other powers on the island. The sporadic raiding parties of Vikings came and went but many settled and created centres at Dublin and Limerick, raiding and vandalising but also intermarrying and settling. Their language flourished in the new towns but seems to have merged into the surrounding Gaelic of Irish language.