This extraordinary, 4-metre long illustrated roll, medieval Ireland's equivalent of the Book of Kells, is unique in Ireland or Britain. Dated to 1372, it features the earliest illustration of an Irish city, stunning depictions of five medieval kings of England, of their deputies in Ireland and of medieval mayors, and also a compilation of royal charters and other documents. It was drawn up as a propaganda exercise in the well-known rivalry between Waterford and New Ross which raged on and off for about five hundred years.

The depiction of Waterford is at the top of the Roll, walls whitewashed and the roofs painted bright colours; above is the mayor (and two bailiffs) of the city kneeling and offering the key of the city to the king, receiving in exchange the sword of justice, the mayor's symbol of office. Below the city is St. John's Pill, a tributary of the Suir river, with three galleys and on the bank below are rabbits, brought to Ireland by the Normans as protein for the winter. Actually underneath this image is writing - possibly a version of King John's charter to the city given in 1215. The rest of the illustrations are to the left and right of the Roll with the text in the middle, charters (the earliest from John dated 1215) and other documents relating to the rivalry between the two ports, ending with a writ of 1371/72. The text is Latin and the roll is of vellum (calfskin).

The kings represented are Henry II with a battle axe and sceptre in his hands in poor condition (reigned 1154-1189); John known as John Lackland with a hawk on his wrist (1199-1216), Henry III bearing a sceptre (1216-1272); Edward I (known as Edward Longshanks or the Hammer of the Scots) with a dog at his feet (1272-1307); a portrait that has been mostly removed, almost certainly Edward II (1307-1327); and two portraits of Edward III (1327-1377) on horseback and on his throne. The importance of the Roll can be understood when one considers that these are the only Irish illustrations of these kings and are the only illustrations of their Irish deputies and the quality adds much to our knowledge of late 14th century costume. The two portraits of Edward III rank among the earliest contemporary illustrations of him. The four mayors are those of Dublin, Waterford, Cork & Limerick, showing Waterford's position as second city of Ireland. The roll shows the self-confidence and wealth of Waterford at the end of the 14th century that its Corporation employed the best scribes and illustrators of the day to draw up this remarkable document. 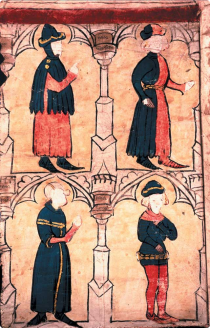 It was known in the 19th century and was copied by du Noyer; it was displayed in Reginald's Tower when that functioned as a museum in the 20th century. It is now fully conserved and makes a spectacular display in its long showcase in the medieval gallery of Waterford Museum of Treasures.