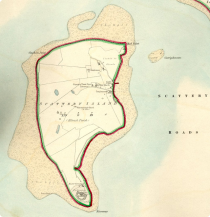 Map of Scattery Island off the coast of County Clare.

Map of Scattery Island off the coast of County Clare.

Scattery Island is a small uninhabited island at the mouth of the River Shannon near Kilrush, in south west Clare. It is a twenty minute boat ride from Kilrush, where the Scattery Island Centre operates from. Dúchas (The Irish Heritage Service) is working at conserving the island and upgrading the facilities for archaeologists, ecologists, and tourists who visit it.

The island has a rich and unusual history associated with it, most of which centres around the life of St. Senan, the founder of the monastery on the island, in the sixth century. Scattery Island was an ecclesiastical centre in early times. St. Senan's monastery was a strict and austere site. So extreme were his conditions, that legend has it, St. Senan forbade any woman living on or landing on the island. St. Senan performed many miracles on the island. Most notable is the story of how St. Senan banished the serpent (The Cathach) from the island before he settled there. It is also believed that his grave is a place of healing. His life story has given rise to many traditions and superstitions that were upheld on the island.

St. Senan's monastery saw much destruction in the following years as a consequence of the Viking raids of the ninth and tenth centuries. It then suffered severely after an attack from Brian Boru and later it was almost demolished in Tudor times during the reign of Queen Elizabeth when she suppressed all monasteries in Ireland. Scattery has also served as a place of safe harbour for the Spanish Armada and as a defence outpost for the English government, from which time the battery on the island dates.

Today the island contains the ruins of the old monastic site featuring a round tower damaged by lightening, a primitive stone cathedral, an oratory, Teampall Senain and St Senan's Bed, and the church of Ard na nAingeal, where the Archangel Michael is said to have appeared to St. Senan. Along with these monastic ruins, the island is adorned with a beautiful semi-natural grassland which is of great interest to ecologists who visit it.

The island once housed over 141 people during 1841 and 1881. However due to social and economic decline the population of the island began to decrease rapidly from 1926 and has been uninhabited since 1978. This passed life on the island is echoed in the abandoned remains of the community on Scattery. A lighthouse, a street, old cottages and the church 'Teampall na Marbh' which hosts the graves of the people of Scattery, encapsulate the isolated life that was once led on Scattery.