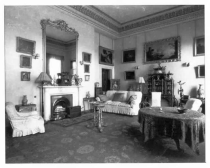 A photograph of the living room, Kenure House.

A photograph of the living room, Kenure House.

from the collection of the Office of Public Works.
Enlarge image

In accordance with tradition, the parish priest of Rush was invited to have afternoon tea with the Colonel on one day each year. I remember on one occasion the priest drew the Colonel's attention to a painting of a nude woman, which hung on the wall over the staircase, where the stairs branched right and left. Apparently, the priest expressed shock at the painting, because the Colonel had it removed to the trophy room where it lay afterwards, covered by a white dustsheet. I loved to lift the sheet to look at what was underneath!

There was no drinking water on tap in the house, and it had to be drawn from a well known as St Catherine's well, on the carriage drive near the cemetery. The well was housed in a small concrete structure with slated roof, and it was quite deep. The water was so clear that when the door was opened there appeared to be nothing within. It was the job of the farmhands to draw the water to the house. The vehicle used was a very large barrel mounted on two wheels with two shafts into which, like a horse, one of the farmhands would be harnessed. A second man would push from behind and when full, the barrel would be parked in the small yard, outside the back door, at the rear of the house. The water was always ice-cool and beautiful to drink.

My bedroom was situated above the pantry, a short distance from a bedroom known as the "Blue Room", which was said to be haunted. I was only fourteen years old at the time and as there was no electric light in the house, my heart often stood still as I passed it with my flickering candle. One night as I lay in my bed I heard a tap-tap, tap-tap, in my room, and petrified, I covered my head and put my fingers into my ears to shut out the sound.  Finally, unable to sleep, I arose, and with my candle in hand, I made my way down through the house to my aunt's sitting room. My uncle William was with her, and I pleaded with him to come to my bedroom to hear the tapping sound. He was very cross and reluctantly he came with me. The cause of the tapping turned out to be the blind on my window, which flapped slightly in the breeze. I never complained again when afraid. 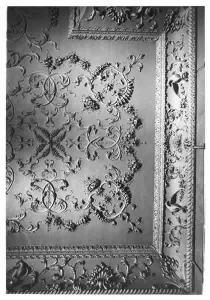 Photograph showing the detail of the drawing room ceiling.

Photograph showing the detail of the drawing room ceiling.

One night, when my aunt was away on holidays I came near to setting fire to the house. I fell asleep when reading in bed one night, and when I awoke the room was full of smoke and the dressing table was on fire. The candle had burned down and the grease had flowed out of the holder onto the dressing table, setting it alight. Choking from the smoke, I dashed to the washstand and threw a jug of water onto the blazing table. It was a near thing. When my aunt heard the news she was horrified. I don't know whether her relief that a near disaster had been averted stemmed from my not having been burned to death, or from the fact that the house had been saved. In any event, that was the end of my reading in bed.

I loved to spend a lot of time in the trophy room examining the trophies brought back from foreign countries They all belonged to General Sir Roger Palmer who owned Kenure in the second half of the 19th Century. He had fought, while with the British army, in various countries, and he brought back mementoes from all of them. From the northwest frontier of India, where the army fought the Afghans and the hill tribesmen, there were strange 'Kukri' knives and guns, as well as many strange weapons. From Borneo, there were shrunken heads, stored in a glass case, and poisoned arrows, captured from pigmy warriors. A note on a locked glass case read - "Don't touch - Poisoned Arrows". From Africa, there were cowhide shields, as well as knives of different kinds. The General's uniforms from various campaigns were on display, also in glass cases. They were very colourful.

Previous - The Colonel
Next - Visitors