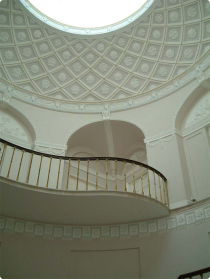 The breathtaking stairhall at Townley Hall in County Louth was designed by Francis Johnston in the late eighteenth century.

The breathtaking stairhall at Townley Hall in County Louth was designed by Francis Johnston in the late eighteenth century.

Image courtesy of Kevin Mulligan
Enlarge image
In all of these designs, the symmetry hinges on the strong architectural emphasis given to the central features of the house. The principles of proportion and symmetry allowed the Palladian character to be scaled down to produce perfect, small-scale houses like those of Summergrove (Laois) and Dysart

A house at Dysart in Co. Westmeath designed by George Pentland for Henry Ogle in 1757. The same pleasing character evident in Summergrove House (Co. Laois) is present here although much more simply expressed; here the walls are rendered with details highlighted in dressed stone.

(Westmeath), built within a few years of each other just before 1760. On both houses, the centre is emphasised by a Classical doorcase, first-floor Venetian window  and, above this, a pediment  with a semi-circular or Diocletian window. The same arrangement, either simplified or elaborated, can be found in any number of houses throughout Ireland, built by prosperous farmers, either as tenants or landlords. Their designs ultimately derived from pattern books, the published sources that educated local tradesmen in the elements of architecture

This simple Georgian house at Berkeley Forest, County Wexford has a plain front with large sash windows; emphasis is given to the centre in a simple tripartite window based on a Palladian type and in the stone portico which is supported on classical columns.

.
Dysart differs from Summergrove in having two-storey bowed (curved) projections on the sides. Such elegant articulation of the wall surface had become popular around the middle of the eighteenth century, when Richard Castle used it to good effect at the neighbouring houses of Belvedere and Tudenham

A house also by Richard Castle for Lord Belvedere's brother in Tudenham and located beside Belvedere; it too has bowed elevations.

in County Westmeath. It was especially favoured by architects of the more refined neoclassical style later in the century, where it was used in Avondale (Wicklow) and Caledon (Tyrone) and with heightened grandeur at Castle Coole, where it was wrapped in columns in an arrangement that was repeated at Ballyfin

An octagonal gate house, originally one of a pair that announed the entrance to Belline House in County Laois.

(Laois) in the early nineteenth century. 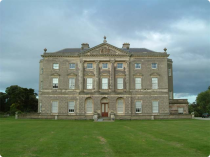 The principal front at Castleward inspired by Palladian designs has an engaged portico with Ionic columns supporting a pediment.

The principal front at Castleward inspired by Palladian designs has an engaged portico with Ionic columns supporting a pediment.

Image courtesy of Kevin Mulligan
Enlarge image
The neoclassical style developed from the 1760s onwards, based on a more careful study of ancient buildings, gradually evolving to include the influence of the architecture of ancient Greece with a more unified design approach that included interiors and furnishings. All of the central figures of the style in England also designed buildings in Ireland. Sir William Chambers designed, amongst other things, the extraordinary and perfect Casino at Marino; Robert Adam designed some interiors, now only surviving in Headfort House; and James Wyatt was more extensively employed on important houses such as Abbeyleix, Curraghmore, Slane and Castle Coole

Castlecoole in Co. Fermanagh is considered the masterpiece of James Wyatt an English architect who designed a number of important houses in Ireland.

. James Gandon, while of English birth, adopted Ireland as his home and gave Dublin its finest neoclassical buildings in the Custom House and Four Courts. Of the native architects, Francis Johnston and Sir Richard Morrison led the way, taking the style into the nineteenth century with Johnston's Townley Hall (Louth). This building best represents the kind of sophisticated severity typical of the period, with its Doric portico indicating the developing interest in Greek classicism. Inside, the circular stair hall is one of the most impressive interior spaces of the period with its enriched domed ceiling and cantilevered stair. 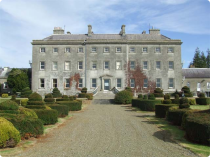 A large Georgian house at Headfort, Co. Meath designed for the Earl of Bective by George Semple. The plain exterior conceals some of the most important and refined rooms of the eighteenth century.

A large Georgian house at Headfort, Co. Meath designed for the Earl of Bective by George Semple. The plain exterior conceals some of the most important and refined rooms of the eighteenth century.

Image courtesy of Kevin Mulligan
Enlarge image
In contrast to the Classical orderliness displayed in this pure architectural style, some houses began to adopt a more varied asymmetrical composition, reflecting the increasing nineteenth-century interest in picturesque compositions, which were achieved by reviving Gothic and Tudor

The seat of the ancient family of MacMorrough Kavanagh family in Borris, Co. Carlow was transformed in the 1820 by Richard and William Morrison with square corner towers and an abundance of Tudor detail.

styles. Castellated houses only really emerged in the late eighteenth century, and the first Gothic features employed were purely for aesthetic purposes, without any sense of the defensive considerations that were central to Gothic architecture previously . At first, the Gothic style was usually confined to garden buildings as playful curiosities, and romantic evocations such as the toy-like fort at Hillsborough. At Castleward in County Down, two fronts, one Classical the other Gothic, provide a rare commentary on the dilemma of styles in the eighteenth century that was to become a preoccupation in the nineteenth century. A much more serious character is evident in the unrendered castles of Slane, Markree

The garden front of this large castle by Francis Johnston in Markree, Co. Sligo is a symmetrical composition.

and Gormanston, and on a smaller scale at Lisnabin

A modest symmetrical castle built in the early nineteenth century for the Purdon family at Lisnabin, Co. Westmeath

, all symmetrical buildings by architects trained in the Classical tradition, who were reluctant to give up symmetry and used Gothic detail purely as a decorative mantle. Many buildings similar to Slane evolved their appearance from an earlier structure, often more genuinely Mediaeval than that designed to replace it. Large castellated mansions, like Duckett's Grove

The wilful asymmetrical arrangment of the building at Duckett's Grove in County Carlow contributes to the romantic, picturesque qualities.

(Carlow) and Tullynally Castle (Westmeath), have at their core an earlier Georgian house that still stands out, barely dressed up in its architectural dress of the latest fashion.

A smaller Georgian house of the 1760's in Summergrove, Co. Laois built for the Sabatier family whose designer is not known. The design is compact, with a well proportioned block highly finished in dressed stone with carefully placed classical detail.

A small rural villa by Richard Castle for the Earl of Belvedere on the shores of Lough Ennell. The house is distinctive for its curved or bowed end walls which became popular in the late eighteenth century.

The plain Georgian house of the Chapman family was known as St. Lucy's until tranformed into a romantic and picturesque castle in the first half of the nineteenth century and renamed Killua.

Previous - The Country House
Next - The Demesne Landscape