Understandably more impressive were the jail buildings erected in a number of large provincial towns. Those at Longford, Monaghan, Trim and Cavan were forbidding structures, comprising cells arranged in blocks forming a U-plan, each block opening onto an enclosed exercise yard, with the chapel and governor's house in the centre, and all enclosed by high walls. Like the famous entrance to Kilmainham Gaol, a severe gatehouse displays the kind of direct symbolism favoured in prison design: the heavy channelled or rusticated stonework demonstrating impregnability, while exploiting the psychological drama by expressing the seriousness of the institution's penal resolve.

The railway age arrived in Ireland in 1834, when a line was built between Dublin and Dun Laoghaire. Gradually, a nationwide network was developed, which brought elaborate new building complexes to all regions. The same spirit of competition evident in bank architecture was present in the great architectural variety displayed by railway stations. The termini built in Dublin are great buildings, all Classical and each one more monumental than the next. The brooding Egyptian-inspired masses of the Midland and Great Western terminus at Broadstone, by John Skipton Mulvany, make it a highly original building and certainly the finest in its field. Gothic or Tudor styles were favoured for smaller provincial stations, many designed by company architects. Most stations still retain an impressive collection of buildings, with many interesting architectural forms, such as timber signal cabins supported on a stone or brick base, with bracketed eaves and extensive glazing. The complex is usually dominated by ranges of functional buildings, built with limestone rubble and brick trim to serve as goods stores and locomotive sheds, while a square water tower in the same materials supports great iron tanks from foundries in Belfast, Dundalk or Glasgow, recalling the age of iron railways powered by steam. The use of iron was particularly widespread and innovative in railway design, whether functionally to form the actual tracks or to create structural columns to support platform
canopies and footbridges. 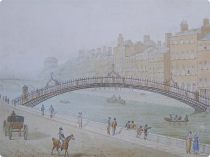 The single-span of The Ha'penny Bridge demonstrates the technical possibilities of iron which were fully exploited in the early nineteenth century.

The single-span of The Ha'penny Bridge demonstrates the technical possibilities of iron which were fully exploited in the early nineteenth century.

The introduction of the Grand Jury Act of 1765 provided a major stimulus for local road building initiatives, essentially by offering both the institutional and financial backing to landlords to develop roads in their local areas. Many new bridges were built to facilitate the roads in the countryside. These vary from the numerous, barely noticed, single-span limestone bridges that can be found carrying local roads over small tributaries to the impressive Shannon bridges. Though their form is dominated by structural considerations, it was still possible to achieve interesting and pleasing designs, especially in the structures where the arch dominates. One of the finest groups of bridges was designed by George Smith, who studied under George Semple, architect of Essex Bridge in Dublin and author of the important book On the Art of Building in Water. Smith's bridges from the 1760s at Graignamanagh, Inistioge, Castlecomer and Kilkenny (GreenBridge) are all invested with well-appointed Classical or Gothic decoration. Like all bridges, they are best viewed from the riverside.

As the nineteenth century progressed, iron became a more popular material in bridge building, and an early example of its potential for structural elegance is found in the iconic Ha'penny Bridge, erected over the Liffey in 1816. The technical possibilities of stone and iron culminated in the extraordinary engineering achievement of the Boyne railway viaduct , extending 90 feet above the river at Drogheda. Designed by the great, locally born railway engineer, Sir John MacNeill, it spans the river in three stages, with latticed wrought-iron trusses borne on tall masonry piers and impressive arched approaches on each side.

Broadstone Station is a distinctive building designed by John Skipton Mulvaney in 1842 as the terminus for the Midland & Great Western Railway.

Railway viaducts, like this example on Thomastown railway, demonstrate the great technical and engineering achievements of the railway age.

Previous - Religious Buildings, Schools and Workhouses
Next - Buildings of the Countryside