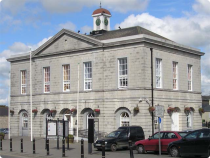 This large classical building in Edenderry, Co. Offaly was designed by Thomas Duff for the Marquess of Downshire.

This large classical building in Edenderry, Co. Offaly was designed by Thomas Duff for the Marquess of Downshire.

Apart from churches, market houses and courthouses were, regardless of scale, often the only imposing examples of architecture in a town. In the eighteenth century, improving landlords encouraged trade by erecting a market house, often isolated in the town centre, like the example in Portarlington. Those erected in the nineteenth century have a more developed and formal architecture, though most are consistent in the provision of an open arcade at ground level. The market house at Edenderry, which stands in the market square, is a building

of considerable formality, and was designed by Thomas Duff in 1826. Much of its architectural distinction is expressed in the quality of the stonework and its pedimented breakfront, bearing the arms of Lord Downshire. In 1844, the landlord of Clones replaced the old eighteenth-century market house with a massive and assured Classical building by William Deane Butler. This presides over the Diamond (as the marketplaces of Ulster are known) with a stately bearing, and in its pediment bears the arms of Lord Dacre from the old market house. 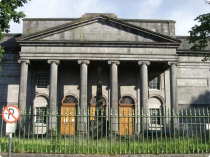 In the first half of the nineteenth century a number of grand courthouses were built in larger country towns. The earliest of these is in Dundalk designed by Edward Parke and John Bowden in 1819, followed by William Morrison's more monumental buildings in Carlow and Tralee of the late 1820s. The example built in Tullamore in 1833 is by J.B. Keane who had worked as an assistant to the Morrisons.

In the first half of the nineteenth century a number of grand courthouses were built in larger country towns. The earliest of these is in Dundalk designed by Edward Parke and John Bowden in 1819, followed by William Morrison's more monumental buildings in Carlow and Tralee of the late 1820s. The example built in Tullamore in 1833 is by J.B. Keane who had worked as an assistant to the Morrisons.

Most of the courthouses in Ireland are nineteenth-century buildings. Many follow a standard plan, such as those of Callan and Clifden, while those of Tullamore, Carlow, Dundalk and Ennis are all free-standing monumental Classical buildings with columnar porticoes. The style invests them with a great deal of their authority, an effect further enhanced by the use of good-quality dressed stonework and the elevated position of the buildings, which are entered by climbing broad flights of steps. Designs in a Gothic or Tudor style were rare, though good examples exist at Athy and Sligo, which are built according to the personal tastes of their architects.

Kells, Co. Meath
Image courtesy of Kevin Mulligan
Throughout the nineteenth century, older thatched houses were gradually replaced by more solidly built commercial premises with slated roofs. Even when gently varied, these expressed the same essential character. Most commercial premises have living quarters overhead, and reflect a similar preference for pleasing and restrained Classical details. Often, the only consideration of architectural interest is the distinction between the sizes of the windows of the upper floors. Greater ornamentation is usually invested in the shopfront. In most Irish towns, there survives a decent, timbered shop front

An attractive late nineteenth century carved shopfront in Kells, Co. Meath inserted in a Georgian townhouse with its fanlit doorcase.

that subtly reveals some of the vocabulary of Classical architecture. This generally consists of thin pilasters supporting a frieze  and cornice, bearing the name of the premises in bold lettering

The pleasing simplicity of the traditional Irish shopfront, like here at Mullagh is an important feature of our towns that deserves to be preserved.

Occasionally, business premises display very elaborate and Kingscourt, Co. Cavan experimental decoration. The unusual stucco decoration of craftsmen like Pat McAuliffe of Listowel in the late nineteenth and early twentieth centuries brought a zany confection of gaily painted decoration inspired by contemporary, Celtic and Byzantine art, of which The Emporium on Church Street in Listowel is just one example. The faience maiolica (glazed ceramic tiles) front of Hamill's public house in Ardee demonstrates the great variety of decorative materials that were available in the period.

The most understated commercial buildings, once well represented in every town and village, were of a kind known as spirit-groceries. Combining a public house and general provisions store, they embody an important element of cultural and social heritage, rather than representing a purely architectural type. Garland's, an eighteenth-century thatched house in Kingscourt and Morrisseys, a more extensive and formally presented premises in Abbeyleix, are excellent survivors of this once-common type. 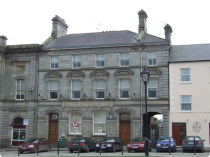 This Bank of Ireland in Clones was designed in 1892 by Millar & Symes as a conscious effort to blend with the Market House which it adjoins thereby investing it with some of the same authority.

This Bank of Ireland in Clones was designed in 1892 by Millar & Symes as a conscious effort to blend with the Market House which it adjoins thereby investing it with some of the same authority.

The former Hibernian Bank in Monaghan Town was designed by O'Neill & Byrne in 1874 as a highly textured building, given prominence by its variance with the regular streetscape.

, banks soon added variety to the commercial streetscape. New banks emerged, and existing ones grew rapidly, in a spirit of competition that was readily manifested in their buildings. Many architects formed hybrid compositions, resulting in an architecture that seems implicitly 'Victorian', which is particularly expressed in the extensive use of red brick with expressive stone details. Most banks used Classical styles, though liberally interpreted with bold and confident detailing, perhaps in the hope that it conferred assurance on the bank deposits as much as on the buildings.

This massive market house in Clones was designed by William Deane Butler in 1844 as part of efforts to improve the economy of the town.

Once a feature of every town in Ireland, the spirit grocery is a unique building type that has now almost vanished. Gartlan's premises in Kingscourt, established in 1907, has retained its traditional thatched roof, fenestration and internal layout and continues in the same family. The house was built in the eighteenth century when the town was developed by the Pratt family.

The architectural character of most Irish towns derives from the eighteenth and nineteenth centuries, often evolving from older buildings. McParland's in Ennis has all the appearance of an eighteenth century premises but for the diagonal stone chimney stacks which reveal it as a late mediaeval building.