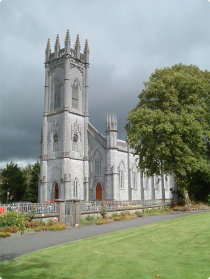 St. Jarlath's Tuam is the first of three large Gothic cathedrals designed on the eve of Catholic Emancipation by Dominick and Peter Madden in the west. Designed in 1827 it was followed by those of Ballin and Ennis.

St. Jarlath's Tuam is the first of three large Gothic cathedrals designed on the eve of Catholic Emancipation by Dominick and Peter Madden in the west. Designed in 1827 it was followed by those of Ballin and Ennis.

The increase in church building in the nineteenth century also contributed to the evolution of towns, where some Catholic churches became the focus of a religious precinct of related buildings, closely grouped together on the periphery of the town centre. In most instances, there is an adjoining cemetery and parochial house, with schools and a convent, typically represented by an imposing three-story block in a familiar form of institutional Gothic.

In contrast to the modest Gothic halls found in rural areas, the churches built in Dublin in the years before emancipation, such as St. Andrew's, Westland Row and St. Mary's Pro-Cathedral, Marlborough Street, are imposing Classical structures. The same was true of Waterford, where the late eighteenth-century Catholic cathedral was given an elaborate Classical interior, its architect John Roberts having also designed its Protestant counterpart in the same style.

The Catholic Relief Act (1829) heralded a wave of church building that quickly gathered momentum, best reflected in the large, triumphant cathedrals of Tuam, Newry and Carlow, designed respectively by Dominick Madden, Thomas Duff and Thomas Cobden. These architects built in a free interpretation of Gothic, based on the English Mediaeval form known as Perpendicular, which eventually gave way in the middle of the century to a more exacting application of European models that was influenced by the writings of A.W. Pugin. Pugin himself designed a number of churches in Ireland, including Killarney Cathedral, and his teachings were closely followed by J.J. McCarthy in the soaring spires of his impressively designed and sited cathedrals of Armagh and Monaghan.

The urban and episcopal churches of the Church of Ireland were larger, grander and more often Classical. In Dublin, St. Werburgh's of 1715 and St Ann's of 1719 are large, galleried halls with a short chancel and elaborate Classical fronts. Both were originally planned with towers inspired by the ambitious churches of London by Sir Christopher Wren. In Cork, Saint Fin Barre's Cathedral is the most ambitious project of the nineteeth century, replacing the old Georgian church with a lavish French-Gothic style building by William Burgess. 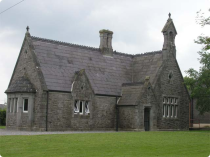 A small village school in Geashill, Co. Offaly built in 1864 under the patronage of the landowner.

A small village school in Geashill, Co. Offaly built in 1864 under the patronage of the landowner.

In the eighteenth century, education was provided principally by Protestant foundations, in the form of privately endowed charity schools or charter schools. Their architectural sophistication ranges from the kind of massively scaled, sober Classical block of Monasterevin Charter School to the handsomely fronted Wilson's Hospital in Multyfarnham, laid out in a Palladian manner with a distinctly domestic aspect. The same sort of half-way house between domestic and public architecture is evident in seminaries developed in the nineteenth century like St Macartan's, Monaghan

St. Macartan's in Monaghan is a large and austere institutional complex designed as a seminary by Thomas Duff in 1838.

, designed by Thomas Duff and based on the mother foundation at Maynooth. Smaller village schools and model schools, like those in Geashil and Trim, were built in a Tudor-Gothic style.

In the twentieth century, rural schools were centralised. They were replaced by larger buildings to a standard design, comprising a central structure with high windows and lower flat-roofed elements ranging across the front and extending on either side. This architecture is easily identifiable, particularly in the provision of standardised water towers and pillared play shelters. At secondary level, the vocational schools of the mid-twentieth century are easily identified by their architecture. They are designed in a modern, Classical idiom, very plainly expressed in the fenestration and basic stucco details. Usually the door surrounds, though bearing minimal decoration, can be identified as unmistakably modern.

This workhouse in Carrickmacross is one of the best preserved examples of the standard plan for workhouses devised in the 1840s by George Wilkinson and built throughout Ireland.

This workhouse in Carrickmacross is one of the best preserved examples of the standard plan for workhouses devised in the 1840s by George Wilkinson and built throughout Ireland.

In the nineteenth century, the impoverished circumstances of the majority of tenant farmers forced the government to provide social reforms and direct relief. One of the most conspicuous results of the passing of the Poor Law Act of 1834 was the erection of workhouses on the outskirts of larger towns. These wholly institutional complexes were built in the early 1840s to a standardised model designed by George Wilkinson. The typical plan placed the master's house to the fore, with larger ranges housing dormitories, kitchens, refectory, schoolrooms, infirmary, chapel and morgue, placed in succession behind. The typical austerity and utilitarian character of these buildings was relieved only by a relatively modest repertoire of Tudor details, including tall chimneys and hood mouldings, features that were particularly evident in the master's house. Although the workhouses were designed to be built in haste, they displayed remarkably well-executed stonework throughout, with internal features such as limestone cantilevered stairs. The mullioned fenestration  found on most of the buildings, originally filled with quarry glazed windows of cast-iron, always exploited the full aesthetic possibilities of these materials. Well-preserved examples can be found at Carrickmacross and Dunshaughlin.

St. Macartan's Cathedral is one of Ireland's great Gothic Revival cathedrals. Its designer, J.J.McCarthy, was one of the principal followers of the influential architect A.W.N. Pugin who advocated a careful and studied approach to the application of the Gothic style.

This attractive convent in Mooncoin adjoins the parish church.

St. Mary's Pro Cathedral was the most ambitious Catholic church erected in Dublin. Erected before Catholic Emancipation was granted it was built in an austere Greek inspired Classicism. The Classical style was often favoured for earliest city churches of the nineteenth century.

St. Macartan's in Monaghan is a large and austere institutional complex designed as a seminary by Thomas Duff in 1838.