The new political confidence and economic vibrancy of the eighteenth century was most clearly expressed in the erection of great country houses. Each house was placed at the centre of a distinct, enclosed landscape unit known as a demesne. As a base of power and influence, these houses endured for two centuries, and in architectural terms shaped the landscape in their surrounding environs. The great era of building belongs to the first half of the eighteenth century, reflecting the enormity of the changing circumstances at the end of the seventeenth century, when approximately 80% of the land changed hands. 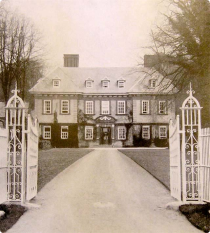 Beaulieu in County Louth is a large undefended house beside the Boyne estuary, built by John Curle between 1710 and 1720 for Lord Ferrard.

Beaulieu in County Louth is a large undefended house beside the Boyne estuary, built by John Curle between 1710 and 1720 for Lord Ferrard.

Image courtesy of Kevin Mulligan
Enlarge image
During the short reign of the last Stuart monarch, Queen Anne, larger houses were built in an old-fashioned Dutch style of classicism popularized in England in the late seventeenth century. Beaulieu (Louth, 1710) and Stackallan (Meath, 1712) are both of this type: large, cubic houses with steeply pitched roofs and a prominent eaves cornice . Significantly, these houses are undefended, freestanding blocks that reflect a growing confidence in the belief that Ireland had been conclusively settled.

In County Kildare, Castletown House is an exceptional building erected in the early 1720s for William Connolly, whose meteoric rise to becoming one of the wealthiest and most powerful individuals in Ireland reflected the opportunities in the eighteenth century for enrichment through land. The house was largely designed by Alessandro Galilei, an Italian who chose to impart in the massive three-storey front of dressed stone the character of an urban Renaissance palace. The articulation of the front, without any breaks or projection, adds to a sense of the monumental. For scale and grandeur, Castletown was barely rivalled in the period, with the exception of James Wyatt's late eighteenth-century masterpiece of Castle Coole (Fermanagh). Significantly, the spacious interiors at Castletown were completed by Sir Edward Lovett Pearce, the foremost Palladian architect of the time, who had recently returned from Italy where he had seen the buildings of Palladio first hand.

The Palladian villa became an ideal for Irish patrons, just as it had been for Venetian princes of the sixteenth century. At Bellamont Forest, Pearce re-created a perfect example in the compact brick house he designed for the Earl of Bellamont near Cootehill. Designed without wings, so that it could be seen from every side in the spirit of Palladio's famous Villa Rotunda, he added a giant temple front with Doric columns, a first in Irish architecture. 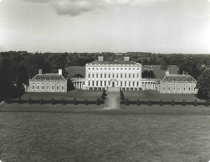 Built 1719-1732 for the lawyer and parliamentarian William Connolly, Castletown was the first great Palladian country house of the eighteenth century. It was designed by Alessandro Gallilei and completed by Sir Edward Lovett Pearce.

Built 1719-1732 for the lawyer and parliamentarian William Connolly, Castletown was the first great Palladian country house of the eighteenth century. It was designed by Alessandro Gallilei and completed by Sir Edward Lovett Pearce.

© The Irish Architectural Archive
Enlarge image
However, it was the addition by Pearce of the wings at Castletown, with curved screens of Ionic columns linking outer blocks, that established the most popular Palladian model in Ireland. The arrangement was later taken up with great variety by his assistant, Richard Castle, whose name dominated the field of country house design until his death in 1751. Russborough, County Wicklow, is possibly Castle's finest design, a house that echoes Pearce's design for Bellamont, though in this case it sits within a typically elaborate Palladian complex. Here the formal geometrical layout establishes a functional hierarchy, with the house as the dominant central block, elegantly proportioned and raised over a basement with curved links connecting it, as at Castletown, with a smaller stable and kitchen block on either side; the symmetrical arrangement extends beyond these features into symmetrical complexes, with additional screen walls with arched gateways

At Florencecourt, Richard Castle designed straight rather than curved arcades to connect the house to the wings.

. Even in relatively modest houses, the addition of wings added grandeur, which can be seen in houses like Colganstown and Williamstown (Kildare), Hamwood, (Meath) and Sherwood Park (Carlow).

Built for Gustavus Hamilton, in the same period as Beaulieu, Stackallan is one of the earliest surviving Classical houses in Ireland.

A red brick villa at Bellamont in County Cavan designed by Sir Edward Lovett Pearce in the Italian tradition and directly inspired by the buildings of Andrea Palladio.

Richard Castle, who had been an assistant to Sir Edward Lovett Pearce became the most prolific designer of Palladian houses in the first half of the eighteenth century. Begun in 1740 for the Leeson family, Russborough in County Wicklow is one of the most elaborate houses of its time.