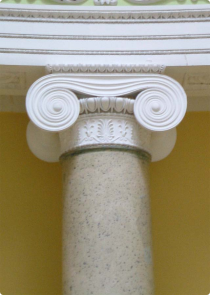 The classical orders Doric, Ionic and Corinthian dominated the architectural styles of the Georgian age.

The classical orders Doric, Ionic and Corinthian dominated the architectural styles of the Georgian age.

At the beginning of the eighteenth century, Ireland had been definitively settled after the combined political and military events of the preceding century. As the full integration of Ireland into Britain's economic and political spheres was finally effected, there followed a century of relative peace and prosperity. It was a time of consolidation, when Ireland was controlled by a privileged new political elite, representing a minority of the population and mostly Protestant and landed. The major redistribution of land after the seventeenth century created substantial estates that formed the principle stimulus for economic growth, with increased trade allowing cities and towns to expand and public architecture to develop. Dublin, as the capital, was the seat of a new parliament, housed in a remarkable building. This parliament was economically and politically subordinate to its neighbour. It remained loyal to a succession of kings between 1714 and 1830, who gave their names to the Georgian era.

This was an age of promotion and patronage of the arts, and of artistic achievement. The Grand Tour, a prolonged tour through Continental Europe, became an essential ingredient in the education and development of the ruling class, leading them directly into contact with both the ancient and Early Modern worlds, to Rome and the heart of Renaissance Europe. As a consequence, the Classical style based on the three principal ancient orders called Doric, Ionic and Corinthian  was favoured as an appropriate expression of a civilised society.

Although Classical details had appeared in Ireland before the eighteenth century, with buildings such as the Royal Hospital Kilmainham, the style now began to be employed on a more academic basis, influenced by direct study and published architectural treatises. Dominating in the first half of the century was the architectural style of the sixteenth-century architect, Andrea Palladio, disseminated through his highly influential I quattro libri dell'architettura, or Four Books of Archictecture, which was first translated into English in 1715. In Ireland and Britain, the Palladian style found its most complete expression in the eighteenth-century country house.

The Custom House building by James Gandon begun in 1781 symbolises the great artisitc and commerical achievements of the Georgian era.

The great age of country house building is represented in this design at Ardbraccan, Co. Meath by James Wyatt of the 1770's.