Small farms with simple houses influenced the character of the rural landscape in the eighteenth and nineteenth centuries, and even today small farmsteads are scattered throughout the western region, from Donegal to Kerry. Although the small tenant farmers long represented the greater portion of the country's population, and their simple dwellings comprised the most common architectural type, they are poorly represented in the history of Irish architecture. 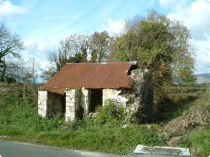 Extremely difficult to date, and most likely no more than two centuries old, the simple cottages of the peasantry that survive represent a building type with an ancient heritage. These small dwellings constitute what we term vernacular architecture: buildings achieved without formal design and usually built by their inhabitants to answer their own essential needs. They achieved deeply functional buildings that evolved slowly over time, providing shelter and livelihood, and controlled only by the demands of the local environment and time-worn traditions. The census of 1841 recorded that almost 60 per cent of the population of Connaught was housed in one-roomed cabins, examples of which are difficult to find preserved today. Typical of the abodes of landless cottiers, these represented the essence of traditional building, usually providing little more than shelter. The tiny whitewashed kitchens offered frugal comfort from a hearth and the light of a single window. In many houses, an additional space under the same roof was used as a byre for cattle, which reflects both the early ancestry of the architecture and the dominance of pastoral farming amongst tenant farmers. However, better houses with chimneys, partitions, and separate or detached buildings for animals gradually superseded the more primitive housing of the previous century. 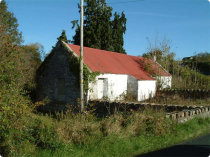 The small projection from the rear wall of this cottage in Aghacashel provides additional space for a bed. Known as a 'bed outshot' it is a regional characteristic of houses in the north-west.

The small projection from the rear wall of this cottage in Aghacashel provides additional space for a bed. Known as a 'bed outshot' it is a regional characteristic of houses in the north-west.

Most of the vernacular houses in the country are low, single-storey structures built with field stone or clay, with thatched roofs. Many are lofted structures with gable ended or hipped roofs, so that they are, in effect, one and a half storeys. There are two principal layouts. In the first layout, the outside doorway opens directly into the larger kitchen-living space. The second is a more private arrangement, where a small lobby is provided between the principal rooms. Elements of regional distinctiveness may always be found in vernacular buildings, whether in the thatching style, materials or variations of the plan, such as the bed outshot, which was common in the north-west region that includes Donegal and Leitrim. Many of these houses developed in an organic way, usually starting out with only two rooms. Over time, they were extended horizontally rather than vertically, though larger, more comfortable two-storey houses are known. Small farm buildings also evolved, in some instances well-built, lofted barns arranged to form a small and attractive complex around the house. In more unusual situations, there are whole farm villages formed in this way, like those of Whitestown in Louth and Lickettstown in Kilkenny.

Sometimes the vernacular tradition and formal architecture were consciously merged with pleasing results. In the post-Famine period, coinciding with the rise many larger houses were built that tended towards greater formality, usually symmetrical with slate roofs; also part of a vernacular tradition, their overall appearance varies in character from region to region. 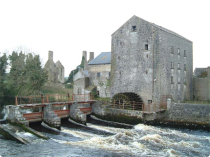 The gaunt five-storey mill in Athleague is a formidable industrial building powered by the River Suck.

The gaunt five-storey mill in Athleague is a formidable industrial building powered by the River Suck.

Ireland is well served by watercourses, which have been exploited as source of power since mediaeval times. Corn milling is a long-established and enduring industrial process. Flax scutching was central to the linen industry, which prospered in the eighteenth century, combining large industrial processes with the important cottage industries of spinning and weaving. Many of the finest mill structures date from the eighteenth century, often adapted and enlarged over time. Most mills constitute simple, unembellished functional structures, built in rubble and often very large in scale, like the gaunt castellated mill at Levitstown, Kildare. The simpler mill at Martry, with its trim mill manager's house, still grinds corn on the Meath Blackwater. A large and grand exception is the great corn mill beside the Boyne at Slane, built in dressed limestone under the patronage of local landlords.

Limekilns are amongst the most numerous and curious industrial structures. Usually found in isolation, with an appearance like an oversized masonry fireplace, they survive as important reminders of a once-widespread rural industry that provided the essential end-product of burnt limestone for fertiliser and building lime.

This small farmyard forms a neat and well sheltered complex.

Small and irregularly sited thatched barns, like this one at Lickettstown, Co. Kilkenny

This farmhouse at Mountainpole, Co. Meath evolved from a simple cottage and while it was enlarged to form the focus of a larger agricultural complex, its architectural character still belongs to the vernacular tradition.

Limekilns like this one in Taghart South are perhaps the simplest of industrial buildings, distinguished solely by a small arched recess.

Previous - Buildings of the Countryside
Next - Windmills, Canals and Lighthouses