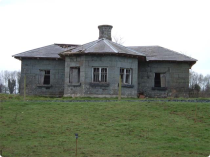 Canals represent the first great engineering works undertaken in Ireland, beginning with the Newry Canal in 1745. They ultimately developed into schemes to make rivers navigable. The Grand and Royal Canals linked Dublin with the River Shannon, which itself was opened up to navigation in 1817. Though never a very effective form of transportation, their virtues now rest in leisure activity and a legacy of fine structures, including bridges, locks, harbours, hotels and warehouses. Most canal locks were served by basic, single-storey houses that occasionally rose to modest grandeur, such as those on the Newry and Ulster canals. The most abiding monuments related to the canals, however, are the cavernous, stone-lined locks, with their timber gates and stone bridges, all similarly designed with a single segmental arch of rock-faced limestone ashlar with parapets and end-piers. 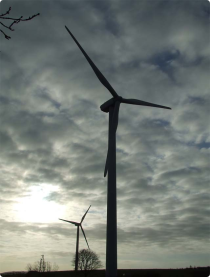 The tall elegant forms applied to wind power in the 21st century.

The tall elegant forms applied to wind power in the 21st century.

Coastal regions and inland hilltops provide dramatic sites, which were used to harness wind power in the past. The restored eighteenth-century windmills at Tachumsin (Wexford), Blennerville (Kerry) and Skerries (Dublin) are picturesque examples of a once more numerous building type. The stout, truncated cone of these buildings has been re-manifested in the conspicuous white clusters that today form commanding symbols of a modern age. The slender, moulded stems and three-bladed propellers strike an architectural pose that holds an aesthetic interest rarely found in functional structures associated with modern technology, such as the harsh, functional engineering of ubiquitous telecommunications masts and electricity pylons.

As an island with a varied and often treacherous coastline, lighthouses have been a prominent feature of Ireland's coastal landscapes since at least the mediaeval period. Wicklow Head Lighthouse, designed by John Trail in 1773, is one of the most dramatic examples from the eighteenth century. It stands out as a gaunt, octagonal masonry tower, rising in six stages to its domed roof. Most surviving lighthouses are neat, romantic compositions of the early nineteenth century. A great many of these were designed by George Halpin and his son. These are short rendered towers, brightly painted with elegant iron balconies surrounding a domed lantern. The neat keeper's houses adjoining them add to their appeal, as do the dramatic situations, such as at Duncannon or Sceilig Mhichíl, where the buildings are tucked into the folds of the cliffs.

Not unrelated are Martello towers, the stocky granite defences dotted along the east coast in the early nineteenth century as a response to the threat of a Napoleonic invasion, and best known through James Joyce, who opens Ulysses in the tower at Sandycove.

Previous - Vernacular Houses, Mills and Limekilns
Next - The Twentieth Century