Drawing of Da Dearga's hostel at Bohernabreena. Shows the Dodder river flowing through hostel. Hostel had several doorways but only one door. Hostel was a bruidhean.

Drawing of Da Dearga's hostel at Bohernabreena. Shows the Dodder river flowing through hostel. Hostel had several doorways but only one door. Hostel was a bruidhean. 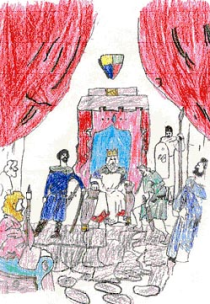 Reign of Conaire his fostersons, the sons of Donn Deasa formed a robber band. Conaire banished them from Ireland.

Reign of Conaire his fostersons, the sons of Donn Deasa formed a robber band. Conaire banished them from Ireland.

Irish people have always been noted for their friendly welcome and hospitality. In ancient times, along the roads of Ireland there were public houses of hospitality called Bruidheans (breens). A bruidhean was always set at the junction of several roads, with a door facing every road. It had a light burning all night, and was always well stocked with food and drink. The Bruighead was by law, given the same protection as the king of the territory.

One of the most famous of these houses of hospitality was the Bruidhean Da Dearga. The actual site of Da Dearga's hostel has caused much debate among scholars down through the years. However Bohernabreena (Bóthar na Bruine), is the name of a townland on the banks of the Dodder. It means "the road of the hostel". Many scholars have thought that it was here that Da Dearga had his hostel.

The destruction of Da Deargas hostel has become one of the local myths.

During the reign of Conaire, peace and prosperity reigned: however, that was soon to come to an end. His fostersons, the sons of Donn Deasa, formed a robber band that stole pigs and cattle. They did this to see what harm they could do the king and what punishment he would mete out to them. They then got Conaire's sons to join them. All of them were captured and brought before Conaire who banished them, and they were forced to leave Ireland.

While in exile they met Ingsel the One-eyed, who was also in exile. Ingcel Caech was the son of the Britons. Ingcel listened with great interest to the foster brothers of Conaire Mor when they talked of Ireland: and he saw in that land a great prize of riches.

He asked the brothers help in raiding Ireland. They gathered together an army and landed on the Dublin coast near Howth.

The Hostel Under Attack

At the same time Conaire had gone to the south of Ireland to settle a dispute. On his way back to Tara he decided to rest for the night. He visited his old friend, Da Dearga, at his hostel in Glenasmole: Da Dearga received him with great festivities.

The hostel lay so that the Dodder flowed through it. There were several doorways in it but only one door. This was placed in whichever doorway the wind blew upon Da Dearga.

Ingcel and his followers kept watch on the hostel. They realised that Conaire was inside. The Hostel was full of warriors, musicians playing and jugglers doing wonderful feats; and Da Dearga with his servants giving out food and wine. Ingcel then marched to the attack and surrounded the hostel.

Ingcel asked one of his Druids to cast a spell on Conaire. The druid makes Conaire very thirsty. Conaire has done a lot of fighting but he can fight no more till he gets a drink. He begged for water, but it is all gone putting out the fire.

One of his servants, Mac Cecht, leaves to seek out water for his king. Mac Cecht travelled all over Ireland looking for water, while the battle raged on, and Conaire was still dying of thirst. At last Mac Cecht finds a lake, Loch Gara in Roscommon, where he fills the King's golden cup.

When he returned to the hostel, he found the defenders all dead or fled, and two of the attackers cutting of Conaire's head. He killed them and poured water into Conaire's headless neck.

The severed head thanked him for his good deed and then died. The hostel was destroyed.

Picture of Conaire and Da Dearga feasting at Da Deargas hostel at Bohernabreena.

Drawing shows hostel of Da Dearga on fire. It was attacked three times by Ingsel and his band of warriors.They were attacking Conaire.

Druid cast a spell that Conaire would become very thirsty. The people in the hostel had used up their water and wine in putting out the fires at the hostel. There was no water for Conaire. His servant left to try and find some water for his king.

Drawing shows the beheading of King Conaire after a battle at the hostel of Da Dearga at Bohernabreena. Happened in pre-Christian Ireland.

Previous - Other stories in English
Next - Ghost of Old Bawn House