In Ireland, air pollution is monitored by the Environmental Protection Agency (EPA) and local authorities at 24 stations throughout the country every hour. View real-time air quality data for air monitoring locations on the EPA website, and on the EPA map viewer by clicking 'Environment and Wellbeing > Clean Air and Health' and selecting the variables. 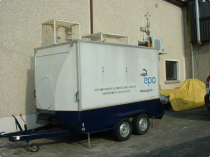 In 2007 there were 26 continuous-monitoring stations operating in Ireland. Five of these were mobile. They carry out air quality monitoring primarily in zones C and D.

In 2007 there were 26 continuous-monitoring stations operating in Ireland. Five of these were mobile. They carry out air quality monitoring primarily in zones C and D.

The readings are noted under the following simple headings:

The index is based on a maximum of four parameters; the one-hour average of SO2 (sulphur dioxide), NO2(nitrogen dioxide) and O3 (ozone), combined with the rolling 24-hour average of PM10 (particulate matter).  All figures are rounded to the nearest whole number.

The EPA also produce annual reports on air quality. They include details of the monitoring and assessment of national air quality, obtained from all the air quality monitoring stations run by the EPA and the local authorities. The most recent report can be found on the EPA website.

EU directives set down the standards for monitoring, assessing and managing ambient air quality in Ireland and the other Member States.

The principles to this approach were set down by the European Commission in 1996 through the Air Quality Framework Directive. Following this, four 'daughter' directives established limits to specific pollutants. However, this Framework Directive and the first three 'daughter' directives were replaced by the Ambient Air Quality and Cleaner Air for Europe (CAFE) Directive in 2008.

The fourth 'daughter' directive specifies target values and monitoring requirements for arsenic, cadmium, mercury, nickel and polycyclic hydrocarbons. This was transposed into Irish legislation in the Ambient Air Regulations 2009.

These regulations set down the limit or target values for the following pollutants:

While the CAFE Directive did not change existing air quality standards, it did introduce new obligations relating to fine particulate matter (PM2.5). This is considered to be particularly harmful to human health. In Ireland, levels of PM2.5 are generally low and fall within the new CAFE limit values.

However, all Member States are must calculate the current exposure of their population to PM2.5 and take steps to reduce this exposure by 2020.

The first of the thematic strategies launched  in the European Commission's 6th Environment Action Programme was the CAFE programme and the Thematic Strategy on Air Pollution.

This Strategy aims to reduce the number of premature deaths from air pollution-related diseases by almost 40% by 2020, with 2000 as the base year. It also sets out to reduce the damage caused to forests and their ecosystems by air pollution.

While the implementation of this Strategy is estimated to cost €7bn annually, the projected health benefits are estimated to be about €42bn, highlighting its cost effectiveness.