By far the largest contribution to radiation exposure, of approximately 86 per cent, comes from natural sources. Man-made sources contribute approximately 14 per cent and are dominated by the beneficial use of radiation in medicine. Doses from other man-made or artificial sources account for less than 1 per cent.

However, the relatively high radon levels in Ireland, compared with some other European countries, puts us in the top ten EU countries in terms of radiation dose to the population. The Radiological Protection Institute of Ireland, who merged with the EPA in 2014, have produced a map showing those areas of the country with higher Radon levels.

Natural background radiation can be classified into three groups: 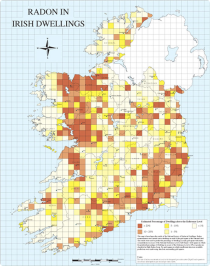 See can you spot where you live and how much Radon is present there?

See can you spot where you live and how much Radon is present there?

The effects of high and very high doses of radiation, including serious injury, cancer and death, are reasonably well known from scientific studies. The very make-up of the earth - the rocks and the soil - emit radiation. Igneous rocks such as granite have a greater concentration of radioactive elements than sedimentary rocks like limestone. The average annual dose that we receive in this way in Ireland is about 0.31 mSv. The attached video provides a simplified breakdown of the radiation doses received by the Irish population.

This is a naturally occurring radioactive gas that originates from the decay of uranium in rocks and soil. The gas is colourless, odourless and tasteless. It is dangerous when inhaled - in an enclosed space - as it can lead to lung cancer. When radon is in the open air however it quickly disperses. It is estimated that 70 years of exposure to this gas in the home at 200Bq/m3 (Becquerels per cubic metre) carriers a risk of about 1 in 50 of contracting fatal lung cancer.

The Radiological Protection Institute of Ireland (RPII) estimates that approximately 91,000 homes in Ireland have elevated levels of radon. They provide a radon test service for anyone wishing to check the levels in their home or workplace and this test is recommended especially if you live in high radon areas of the country. Why not estimate the radon levels in your area using this interactive map?

New prevention measures to reduce radon exposure were introduced in July 1998, and revised Building Regulations required the placing of a radon barrier under new buildings.

The Department of the Environment, Community and Local Government publication, Radon in Existing Buildings - Corrective Options gives information to building designers and householders about measures they can take to reduce radon levels. A more recent report 'Undersrtanding Radon Remediation. A Household Guide' was published by the EPA in 2019.

Thoron can be quite concentrated in people's homes, due to building materials. Seven per cent of the average person's radition dose is from inhalation of thoron in their own home.

On average, 8 per cent of the average person's dose is from external gamma radiation. It comes from the rocks and soil in the ground, as well as the stone and concrete used in construction.

Internal:  Since there is radiation in the environment around us, it is inevitable that it enters our bodies through the food web. On average we each receive an annual dose of 0.30 mSv from these various internal sources, which is six per cent of the average person's dose.

Occupational: Exposure in the work place is another source of radiation and nearly all of this come from the beneficial use of radiation in medicine.