Upsetting the unique balance between man and nature could have a detrimental effect on biodiversity. Global warming, increased pollution, overexploiting plants, animals and their habitat are factors for the equilibrium being shifted. Animal and plant species are now disappearing at an alarming rate. The rate they are disappearing at is 1,000 to 10,000 times greater because of industrial development. 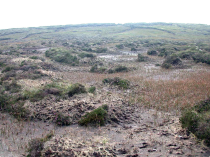 Intensive farming is one factor that is adding to biodiversity loss. An increase in the world's population to over 7 billion and other elements have led to a major need for farmers to get maximum use from their land and animals. This has led to a breaking of the once strong ecology-farming linkage, as many farms are now pressurising the environment, rather than protecting it. The effects on nature can be huge with forests being destroyed to create large open fields, wider use of pesticides which kill bad and good insects, and overgrazing of livestock. Intensive farming is not a sustainable practice due to its detrimental effects on the environment and eventually, human health.

To fully understand the threat to biodiversity it is important to read about the Millennium Ecosystem Assessment, while Ireland's IUCN Red List outlines endangered species in the country.

Previous - Importance of Biodiversity
Next - Effects on Ecosystems