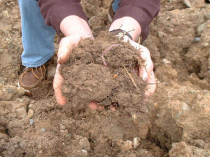 A worm loves the wet nature of this soil

A worm loves the wet nature of this soil

The health of soil is very strongly linked with biodiversity well-being. The two should be thought of together when protecting either. Soil provides a vital habitat for microbes, earthworms and plants. All these organisms play a part in the physical and chemical formation of soils, and in turn have impact on the wider food and water cycles.

The treatment of soil should be done to make the most of its fertility. This will improve natural and agricultural land uses and benefit biodiversity.

Soil management has a real correlation with biodiversity as it can impact on soil volume and structure, leading to a reduced fertility. Acidic soil is a common problem sometimes brought on by the removal of animals from an area. It impacts on its surroundings by reducing the number of worms in the earth. Damage to the soil structure from intensive farming results in changes to the food chain. Calcium and salt levels also affect a soil's composition, but soil erosion is one of the biggest factors as it leads to a loss of topsoil, organic matter and nutrients. It affects fertility and the amount of water available to plant roots. In turn, soil erosion is a growing threat to biodiversity.

In 2002 the Environmental Protection Agency (EPA) introduced the need for a soil protection strategy. In essence it was a European driven idea. The Sixth Environment Action Programme of the European Community 2001-2010 identifies soil as a 'valuable natural resource which takes thousands of years to develop.' It acknowledges that soil protection has not been a major policy for the European Union to date. Therefore one of the key objectives of the sixth EU Environment Action Programme is to protect soils against pollution and erosion and this will be achieved through the development of a strategy for soil protection.

This led to the adoption of the EC Soil Thematic Strategy. Some five years after its adoption, on 13 February 2012, the European Commission published a policy report on the implementation of the Strategy and ongoing activities.

The Paris agreement in 2015 led to the establishment of the 4 pour 1000 initiative, which encourages land managers to return carbon to the soil. If soil carbon was increased by 0.4% per year it would mitigate all human greenhouse gas emissions for that year.

Previous - Soils in Ireland
Next - Importance of Biodiversity