Dolphins in the Shannon

Dolphins in the Shannon

Courtesy of the Department of Environment, Heritage and Local Government
Enlarge image

The River Shannon is the longest river in Ireland at 386km. The source of the river, know as the Shannon Pot, is located in Co. Cavan. It flows through ten counties before reaching the Atlantic Ocean at Kilrush in Co. Clare.

In 1999, Dúchas nominated the Shannon Estuary as the first marine Special Area of Conservation (SAC) to ensure the protection of cetaceans (whales, dolphins and porpoises) in Ireland. It is 113km long and is a well-known calving area. It is also home to the only resident group of bottlenose dolphins in Irish waters, one of only six such groups in Europe.

Newborn calves are born between May and August each year, and they can easily be identified in the estuary due to their small size.

Many islands are studded throughout the Shannon estuary, the chief of which is the important heritage site of Scattery Island. It was here that St. Senan founded a monastery and died in 554. 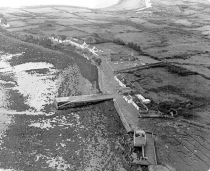 An aerial view of The Street, the main settlement on Scattery Island.

An aerial view of The Street, the main settlement on Scattery Island. 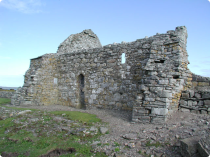 Previous - The Cliffs of Moher
Next - Cork