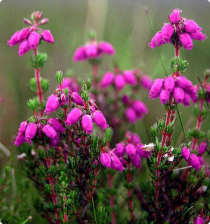 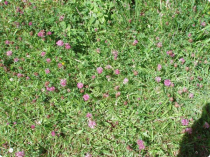 Gougane Barra has not always been covered with trees. In fact, the afforestation program was only started in 1938 when the Irish Forestry Board, Coillte, began to manage the area. Stika Spruce, Japanese Larch and Lodgepole Pine are the main species that were planted. These species were specifically chosen for their ability to withstand the harsh weather conditions of such an exposed region. They also thrive in poor soils.

Along the damp, wet hollows of the mountains there is plenty of natural bog vegetation. Heather, bog mosses, bog cotton, sedges, sundews and butterworts can all be seen. Wild clover is another common wildflower on the slopes of the mountain at Gougane Barra.

The rock faces covered in lichen and mosses. A more unusual plant, the rare Fox’s Cabbage also inhabits parts of the rocks. This plant is one of the Hiberno-Lusitanian group, and their growth in Ireland is confined to small areas in the south west.

There is a wide variety of fauna roaming the mountains and valley of Gougane Barra. In quieter areas of the park otters hunt and fish by night. Badgers, foxes, rabbits, pine martens are constant occupants of the forest, and sometimes the timid, bashful field mouse also makes an appearance.

The coal tit, wren, robin, wood pigeon, willow warbler, cuckoo and thrush are just some of the species of birds at Gougane Barra. Around the lake, moorhens, cormorants, herons and a small number of mute swans reside.

The Song Thrush can sometimes be seen singing from chimney tops and television aerials. The song is loud with short bursts of song lasting up to five seconds followed by a short break and then another burst of song. 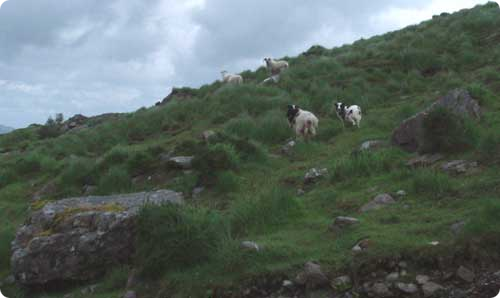 One of the more interesting animals of the area is the Jacob Sheep. Jacob Sheep are a very ancient breed that is believed to have originated in Syria over 3,000 years ago. Both rams and ewes can produce anything between two and six horns, giving them a most unusual appearance. They are black and white in colour and very hardy, therefore suited to the exposed environment of Gougane Barra. They are prized for their high quality wool.