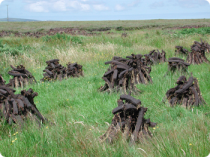 Most of the mountain ranges of Cork consist of Old Red Sandstone that was deposited during the Devonian Era. The mountains have gained their present shape from glacial erosion during the last Ice Age, which also left many lakes and valleys throughout. Peat bogs, grassland, heaths and some small conifer plantations are the main landscapes that cover the mountainous areas.

The Shehy Mountains consist of a range of low mountains that lie on the border between Cork and Kerry. Common flora includes butterworts, sundews, bilberry bushes and heathers.

The highest point in this mountain range, and also in all of Co. Cork, is called Knockboy. This name comes from the Irish Cnoc Buí, or ‘Yellow Hill’. It stands at 706 metres. The Shehy Mountains are also the source for both the River Lee and the Bandon River. 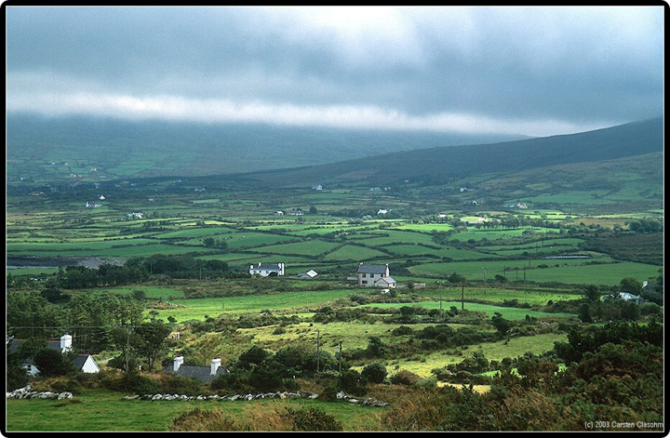 The Caha Mountains, just north of Bantry Bay , from on the Beara Peninsula that is also along the border between Cork and Kerry. The highest point in this mountain range is Hungry Hill, which stands at 685 metres. The summit of the Sugarloaf, another of the Caha Mountains, offers spectacular views of Bantry Bay.

The Boggeragh Mountains lie between the Blackwater River and the River Lee, to the south-west of Mallow. The highest point is Musheramore, which reaches 643 metres. The area primarily consists of blanket bog, forestry and streams. There are plans to build a wind farm with 19 wind turbines in the area in the near future. 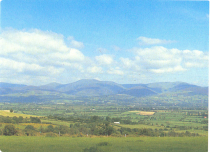 The Galtee Mountains span across three counties: Cork, Tipperary and Limerick. These are the highest inland mountain range in Ireland, with the main Galtymore peak at 919 metres. The Cork side of the Galtees is mainly covered with coniferous woodland, for example Norway Spruce, Scots Pine, and Larch. The dominant flora throughout the summer months is Rhododendrons, heather and foxgloves.