The Mizen Peninsula is located in west Cork and is an area of exceptional natural beauty. It covers a region of 34 km from Ballydehob village to Mizen Head, which is the most south-westerly point in Ireland. The Irish Light Signal Station at Mizen Head, which was built in 1905 to protect ships from cliffs during fog, is now being used as a visitor centre. 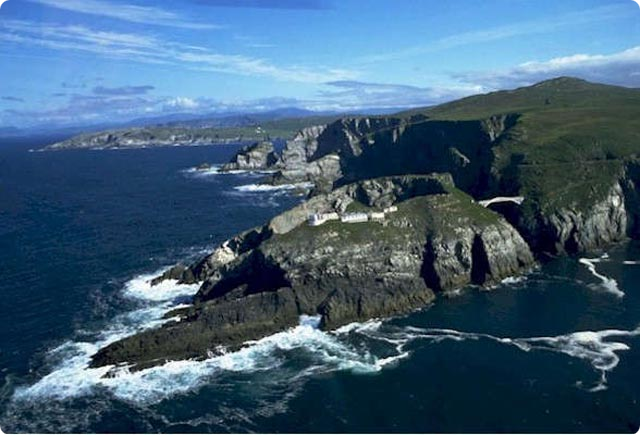 The rugged landscape along the Mizen Peninsula is host to plenty of different habitats. Mount Gabriel dominates the landscape near Schull. This is also the location of the oldest worked copper mines of north-west Europe , dating back to the 17th century BC. Other habitats such as bogs, wetlands, cliffs and the seashore have a full and diverse range of species.

Mammals such as foxes, badgers, bats, rabbits and hares can all be seen roaming the countryside, while dolphins, whales, porpoises, Basking Sharks, and seals inhabit the coastal waters.

Over thirty different butterflies have also been recorded in West Cork. Species such as Red Admiral and Painted Lady migrate to Cork from mainland Europe. The most unusual species is the Gatekeeper butterfly, which is quite common in West Cork but is rarely found elsewhere in Ireland . Examples of other butterfly species found along the Peninsula are Speckled Wood butterfly, Peacock butterfly and Small copper butterfly.

Photograph of a Painted Lady butterfly feeding on a gorse bush. The wings on this butterfly are coloured deep orange with black tips speckled with white.

The Manx Sheerwater (Puffinus puffinus) has dark plumage on its back and head with a pale coloured underside. It has distinctive orange legs and webbed feet. On the wing it has a distinctive flight pattern, flying in a series of rapid flaps followed by long glides over the surface of the sea. An estimated 94% of the worlds Manx Sheerwater population breeds along the Irish and British coast. Like the Storm petrel, the Sheerwater is a nocturnal bird, staying close to the colony when feeding. The majority of Manx and Storm petrels have their colonies in Kerry, The Blaskets, Skelligs and Puffin Island. They feed on fish, in particular herrings, sardines and sprats.

All across the Mizen Peninsula there is an abundance of wildflowers, heathers, and fuchsia hedges. As the climate in Cork is so mild, the flowering spring season begins much earlier than most other areas of Ireland. Foxgloves, primroses, bluebells, daisies and the fiery yellow colour of the gorse bushes bring the countryside to life.

The daisy closes its petals in the evening

The daisy closes its petals in the evening -

A typical gorse bush can be made of up to 20 species of everygreen shrub. The Common Grouse is native to Western Europe, growing in clay and sandy soil.