There are twenty-four different habitats within the park, including six types of woodland, five types of grassland, hedgerows, ponds, streams and wetlands. Many varieties of wildflowers can be found growing in the extensive grasslands. Among them are some rare and protected species, such as Hairy Violet and the wetland grass Meadow Barley.

In total, there are approximately 350 species of plants growing within the Phoenix Park. Varieties of Ash, Oak, Lime, Sycamore, Horse Chestnut, Hawthorn, Beech and Evergreens can all be found in the Park. 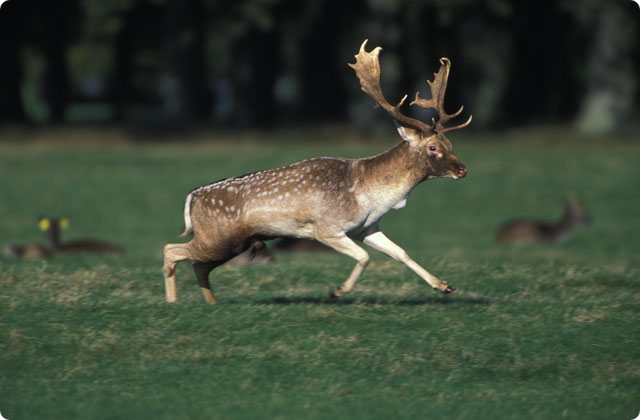 The Phoenix Park is famous for its herd of over 400 wild Fallow Deer. These deer are descended from the original herd that was introduced in the 1660s.

The Furry Glen Pond is inhabited by ducks, while squirrels, hares, foxes and mice are among the mammals that can be seen roving through the woodlands and grasslands. These habitats provide plenty of food and shelter. There are also over twenty badger setts within the park.

Three out of the ten bat species found in Ireland inhabit the Phoenix Park. These are Pipistrella, natterers’ and Whiskered Bats.

The Phoenix Park also hosts Dublin Zoo, which is home to more than 235 species of animals and birds from all around the world. The largest lake in Dublin is located in the African Plains at Dublin Zoo, and measures 2.8 hectares. The zoo was founded in 1830 and is the fourth oldest zoo in the world, after Tiergarten Schonbrunn ( Vienna ), London Zoo and the Jardin des Plantes (Paris). It covers an area of 24 hectares.