Reservoir in the Glenasmole Valley

Reservoir in the Glenasmole Valley 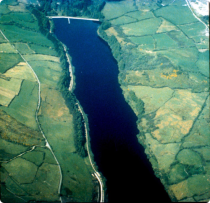 St.Anne's (St. Sanctan's) Churchyard in Glenasmole can be seen in bottom right on bank of reservoir with large part of its original circular enclosure still intact Subjects:landscape graveyard aerial photograph

St.Anne's (St. Sanctan's) Churchyard in Glenasmole can be seen in bottom right on bank of reservoir with large part of its original circular enclosure still intact Subjects:landscape graveyard aerial photograph

Glenasmole  lies in South Dublin by the Dublin / Wicklow mountains, about 5km from Tallaght. It was formed during the ice age by a glacier and consists of two valleys. The higher one is unusual in that it was shaped by upland and lowland glaciations. The lower valley is more deep and narrow.

The Glenasmole valley is a designated Special Area of Conservation and has several different habitats which are home to some rare  plants, mammals and birds. Some of these habitats are listed under the EU habitats directive. This directive protects habitat types of European importance.  Three such habitats are found in the Glenesmole valley- Orchid-rich grassland, molina meadow  and petrifying springs. Other  habitats in the valley include  bog, which the sides of the valley are covered in and also grass, stony ground and woods.

The river Dodder rises in the valley and Maureen’s brook, Cot Brook and Slade Brook join together to form one stream. There are also two reservoirs in the centre of the valley which shape the landscape and are surrounded by evergreen and deciduous trees. These are known as the Bohernabreena Waterworks and stretch from Bohernabreena to Casltekelly.   They were constructed between 1883 and 1887 and they supplied drinking water for the city of Dublin and also supplied the many mills in the area at the time.

The valley of Glenasmole is famous in mythology  for  featuring  in many  stories and ledgends about Osin, Fionn and the  Fianna.