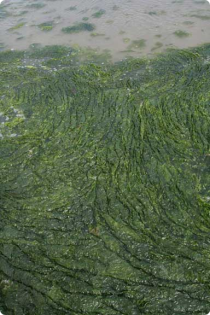 South Dublin Bay as far as Dún Laoghaire is a Special Area of Conservation (SAC). This is an extensive area of intertidal mudflats which is a very important habitat type and is listed on the European Union (EU) Habitats Directive. Varieties of Green Algae and Eelgrass are found throughout the area where there are numerous lugworms and cockles.

The whole of South Dublin Bay is an extremely important international site for waterfowl. Populations of Oystercather, Redshank, Ringed Plover and Dunlin are continuously present, although they frequently travel between the south and north bay.

One of the most notable autumn residents of South Dublin Bay are the large flocks of gulls, both Common Gulls and Black-headed Gulls, that come to roost in the area. A huge number of terns, some 2,000-3,000 each year, also make their way to the South Dublin Coast for roosting in the autumn-time. 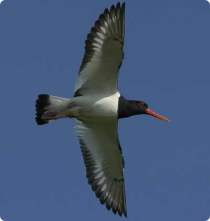 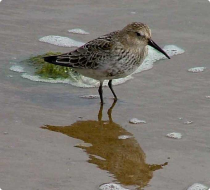 A small wader and the most common one in winter.

A small wader and the most common one in winter.