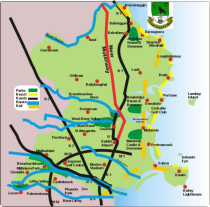 This is a map showing the towns and villages of Fingal, Co. Dublin.

This is a map showing the towns and villages of Fingal, Co. Dublin.

The county of Fingal lies to the north of Co. Dublin. It stretches along the coastline from Portmarnock all the way to Balbriggan, and extends inland to include Castlekock, Rowlestown, Garristown and Naul. The county of Fingal was established as a result of the Local Government Act in 1993.

The coastal area of Fingal is an important natural amenity for the county. The trails on Howth Head attract nature enthusiasts, where they can enjoy the sea air as well as the abundance of flora. Other towns, such as Malahide, Skerries and Portmarnock offer walks along an unspoiled coastline.