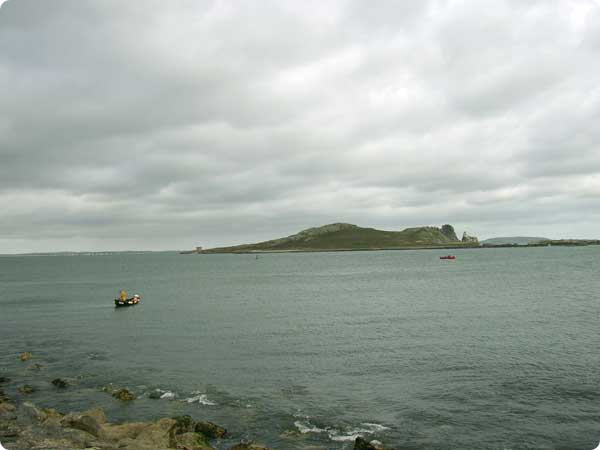 Located just north of Howth, Ireland’s Eye was formed during the Cambrian Period and is mainly made up of quartzite.

The widespread drift soils on the island are essential to support the plant life, such as Bracken, Red Fescue Grass, Bluebells and Pennywort. Rare plants have also been recorded growing in the thinner soils of the island, for example Spring Squill and Knotted Clover. Along the spectacular cliffs of the island, Rock Samphire, Sea lavender, Rock Spurry and Tree Mallow flourish.

One of the most important roles of Ireland’s Eye is as a sanctuary for sea-birds. Fulmars, Cormorant, Shags, Gulls, Guillemots and many more species occur regularly on the spectacular cliff-rock known as ‘the Stack’ to breed. Peregrine Falcons have a long history of breeding on Ireland’s Eye, while the number of Puffins present has decreased in recent years.

The old ruins of a Martello Tower and a Church dating to the 8th century are the only remains of life evident on Ireland’s Eye.

There is an interesting origin of the island’s name. In old Celtic times in Ireland, it was known as Eria’s Island. This later became Erin’s Island, and when the Norsemen arrived they named it Erin’s Ey (Ey meaning ‘island’ in Old Norse). Eventually, ‘Erin’ was substituted for ‘ Ireland ’.