Lough Corrib was named a Ramsar site in 1996 due to the abundance of wildlife it supports. Minks, Stoats and Bats are amongst the population of mammals that inhabit the Lough Corrib area. Irish Hares and Otters have also been regularly observed, both of which are protected under the Wildlife Act 1976 and are listed in the Red Data Book.

Lough Corrib supports an internationally important population of waterfowl. The average population of Pochard is 8,600. Other species of national importance include Coot, Mute Swan, Tufted Duck, Cormorant and Greenland White-fronted Goose. The Whooper Swan, Hen Harrier and Kingfisher have also been recently recorded at close to Lough Corrib, all of which are listed on the EU Birds Directive.

Many of the species listed on the EU Habitats Directive are found at Lough Corrib. Some of these include Sea Lamprey, Atlantic Salmon, White-clawed Crayfish, Freshwater Pearl Mussel, Slender Naiad and Otter. 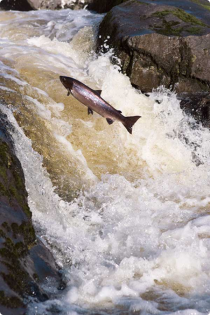