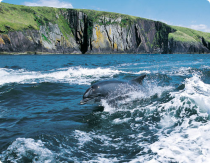 The Dingle Peninsula stretches out alongside the Atlantic for 48km. Many outstanding natural features are located along the Dingle Peninsula, such as the majestic Slieve Mish Mountains and Mount Brandon. The sheer, rugged cliffs that dominate much of the coastline are dramatically contrasted against long sandy beaches. One of the largest sand dune fields in Ireland runs for 5 km along the spit at Inch.