The mountains of Kerry are among the most dramatic in the country, many extending over 2,000 ft high and offering superb views of the countryside. The deep u-shaped valleys and numerous corrie lakes were formed as a result of glacier movements at the end of the Last Ice-Age.

The Slieve Mish Mountains overlook Tralee Bay and run along the eastern half of the Dingle Peninsula. The numerous peaks are of important ecological value as they support populations of many rare plant species such as Betony and Cornish Moneywort. In Ireland, the latter is found only on the Dingle Peninsula. 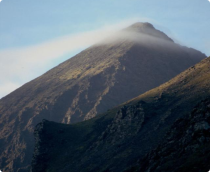 Photograph of Mount Brandon,Ireland's second highest mountain. Mount Brandon is named after the patron saint of Co.Kerry, Brendan and is a mountain of pilgrimage.

Photograph of Mount Brandon,Ireland's second highest mountain. Mount Brandon is named after the patron saint of Co.Kerry, Brendan and is a mountain of pilgrimage.

The MacGillycuddy Reeks, which stretch out along the Iveragh Peninsula, is host to the highest mountain in Ireland: Carrantouhill. At 3,414 ft, it attracts thousands of enthusiastic walkers each year. They are aptly said to have reached ‘Heaven’s Gateway’ at the pinnacle of the mountain. Between the MacGillycuddy Reeks and the Purple Mountains is the famous narrow Gap of Dunloe. This leads into the Black Valley, so-called because it was one of the last outposts in Ireland to be connected to the national grid. It had been without electricity until 1976.

Mount Brandon, located along the Dingle Peninsula, stands at 3,414 ft and is the second highest mountain in Ireland. It is associated with St. Brendan, patron saint of Kerry, who set up a monastery at the foot of the mountain in the 6th century.   It is also protected as a Special Area of Conservation (SAC) due to its abundance of arctic and arctic-alpine vegetation.

The high rocky faces of the mountains of Kerry provide an ideal nesting place Peregrines (protected species on the EU Birds Directive), Buzzards and Sparrowhawks.