Laois is located in the heart of the Irish Midlands. It is bordered by the counties of Offaly, Tipperary, Kilkenny, Carlow and Kildare. All of these counties are landlocked, making Laois the most landlocked county in Ireland.

Laois, or Leix, was originally named after Ludghaidh Laoigheseach who was a descendant from the Knights of Ulster. It later became known as ‘The Queen’s County’ during the reign of Queen Mary in the 16th century. The county was only renamed Laois in 1922 after the War of Independence. 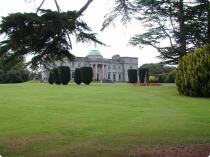 Laois’s built environment consists of many historical sites that are important to Ireland’s heritage. There are over 100 such sites in the county that span roughly 8,500 years of history. For example, Timahoe Abbey was founded by St. Mochua and Aghaboe Abbey was founded by St. Canice, both in the 6th century. Some of the Big Houses of Laois include Emo Court, Stradbally House and Ballyfin House, while Dunamase Castle was the anscestoral home of the O'More clan.

To read more on the heritage towns and villages of Laois, please see the History & Heritage section of the website.

Previous - Features of Kilkenny
Next - Mountains