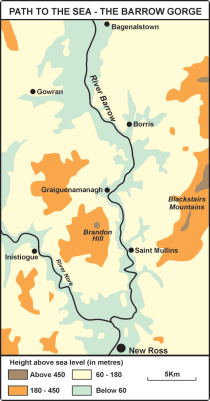 The Barrow gorge extends from near Graiguenamanagh for ten kilometers south toward New Ross.

The Barrow gorge extends from near Graiguenamanagh for ten kilometers south toward New Ross.

Co. Laois is drained by two of the sister rivers, the Barrow (north) and the Nore (south). The River Suir is the third of the well-known sister rivers. The Barrow rises in Glenbarrow, a small valley that runs between the Ridge of Capard and Knockanadtumba Mountain. It forms a natural border with Offaly near Portarlington for roughly 6 miles. Further along its course, it forms the boundary at short intervals between Laois and Kildare, and then Carlow.

Some tributaries of the Barrow also flow through Laois. These include:

The River Nore also has a number of tributaries which follow courses through Co. Laois: