The northwest of Co. Leitrim is quite mountainous while the southeast is comparatively flat.

Sliabh an Iarainn, meaning ‘Mountain of Iron’, is well known for its rich mineral resources, coal in particular. It was also the site of an iron mining works that was in operation until the late 19th century. According to local legend, these mines were worked by the smith-god of the ancient Tuath Dé Danann people, Goibnenn. The mountain stands at 585m and is the third highest mountain in Leitrim. 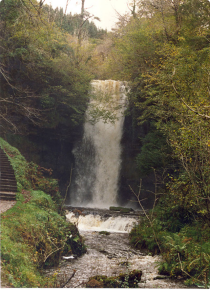 Part of the Dartry Mountain Range that runs along the Leitrim/Sligo boundary has been designated as a Special Area of Conservation (SACs). The area includes the uplands of Sligo’s Ben Bulben, King’s Mountain, Benwiskin, and Leitrim’s Truskmore and Tievebaun. Truskmore is the highest point of the county at 631m, and Tievebaun (from Taobh Bán, or ‘grassy slope’) is the second highest point at 611m. These uplands have been formed from Carboniferous limestone and many areas are covered with shale.

Of particular interest in this SAC is the variety and number of the Alpine and Arctic-Alpine plant population. Within Ireland, many of the Alpine species are unique to these slopes, for example Alpine Saxifrage and Chickweed Willowherb. These species are protected under the Flora Protection Order (1987), together with Alpine Biswort, Mountain Rock Cress, Small White Orchid and Fringed Sandwort, all of which can be found flourishing at this site.

The Glencar Lake is also located within this SAC and attracts much botanical interest. Indeed, the area as a whole is recognised as one of Ireland’s richest botanical areas. Peatlands, petrifying springs with tufa deposits, cliffs, lakes, streams and grasslands are examples of habitats found in this upland region.