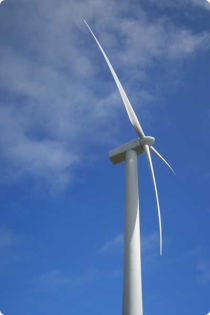 Renewable energy resources are becoming increasingly important in the face of global warming. Ireland aims to create a green economy to help meet its emission reduction targets set by the EU, and renewable energy resources will be central to this policy. In Ireland there are currently 318 wind farms in 29 counties generating 4011.41MW of electricity saving thousands of tons of carbon dioxide emissions. Of this, Co. Leitrim hosts ten windfarms with a total capacity of 69.1MW*.

The wind farms of Co. Leitrim include:

The Spion Kop Windfarm, located on Corry Mountain on the Leitrim-Roscommon border. It is situated at roughly 400m above sea level and consists of two turbines.

Black Banks wind farm has two sites: Black Banks I and Black Banks II. The sites are located at Garvagh, Glebe, just outside Drumkeerin. There are twelve wind turbines in total.