Achill Island is Ireland’s largest offshore island and is connected to the mainland at Achill Sound. It measures 22 km long and 19 km wide, with a population of roughly 3,000 people.

Achill Island is the proud holder of five Blue Flag Beach Awards, its cliffs are amongst the most spectacular in Europe, and the famous Atlantic Drive reveals some of Ireland’s most rugged, natural landscape. In fact, the cliffs at Croaghaun Mountain are the highest in Ireland and the third highest in Europe at 668 m. 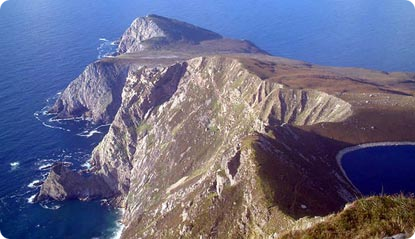 Surrounding Achill Head, the most westerly point of Achill Island, are examples of marine habitats protected by the EU Habitats Directive, such as reef and shallow water bay communities. The reefs support communities of sponges, sea urchins, sea cucumber while the rock face is dominated by jewel anemones. Starfish, brown alga, and mussel are also common, together with the deeper kelp communities.

The landscape of Achill Island, and of Connemara, inspired some of the most famous and distinctive works of the Irish artist Paul Henry, who lived on the island for many years.