Co. Sligo is widely recognised and loved as one of Ireland’s most spectacular, scenic landscapes. Its coastline is shaped by a series of flat sandy beaches, punctuated by headlands and the steep cliff of Knocknarea. In fact, it is from the abundance of shellfish along the coast that gives Sligo its name in Irish, Sligeach translating as ‘place of shells’. 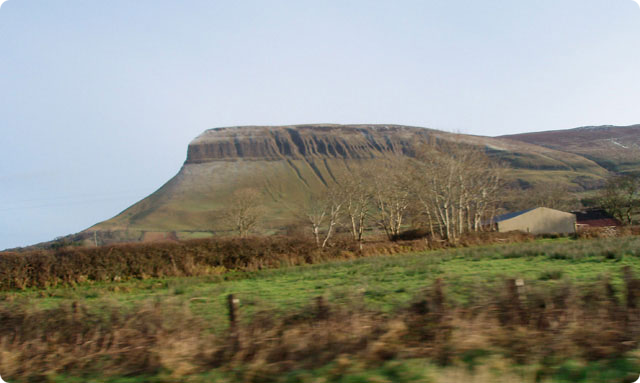 Sligo has four mountain ranges – Datry, Ox, Curlew and Briklieve – as well as numerous lakes. This dramatic landscape was an inspiration much of the poetry of W.B. Yeats and the music of Coleman. Yeats is buried in the churchyard at Drumcliffe. The surrounding area has become known as ‘Yeats Country’.

Co. Sligo is also home to the Irish Raptor Research Centre, which is the largest sanctuary for birds of prey in Ireland. There are 350 birds at the centre from 75 species.

Apart from the wide variety of habitats and wildlife throughout Sligo, it is also full of Irish heritage with over 5,000 archaeological sites. This includes a massive megalithic grave complex at Carrowkeel.

Previous - Features of Roscommon
Next - Mountains