The midway point along Sligo’s coastline is indented by Sligo Bay. This is guarded by the headlands of Aughirs Head to the south and Raghly Point to the north, with a separating distance of roughly 9km. Within these two points lie the three smaller bays of Ballysadare Bay, Sligo Harbour and Drumcliff Bay. These intertidal areas make an ideal habitat for shellfish, which has lead to a thriving local industry. The abundance of shellfish along this stretch of coast also gives Sligo its name in Irish, Sligeach translating as ‘place of shells’. 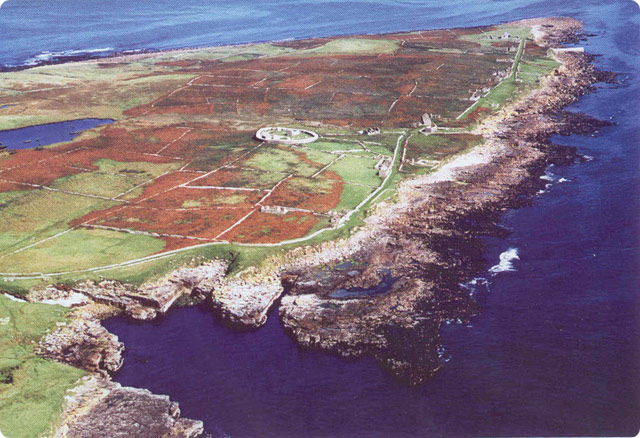 Inishmurray is one of the best known islands of Co. Sligo, mainly as an ancient monastic site attributed to St. Molaise. Two churches on the island are named after the saint, Teach Molaise and Templemolaise, and it was once an ancient pilgrimage site. The island has been uninhabited since the 1950s.

The flat, exposed Inismurray lies within Donegal Bay and is dominated by a wet grassland habitat, with the occasional areas of dry grassland and scrub. The surrounding seas provide a plentiful foraging are for seabirds while the island itself is an important breeding site. It is known for the presence of species such as Arctic Tern, Storm Petrel, Common Gull, Herring Gull, Barnacle Goose, and Eider Duck.

Killala Bay lies to the south of the county, separating Sligo from Mayo. The mouth of Killala Bay is also the estuary for the River Moy, and its entrance is marked by Lenadoon Point. There is a well developed dune system in the areas surrounding Killala Bay, with a rich and diverse flora community. Cow’s Thistle, Cat’s-ear, Marram Grass, Sea Rocket, Lyme Grass, Kidney Vetch, and a number of orchids are among the members of this flora community. Salt marshes also have a strong flora representation, including species such as Sea Aster, Sea Lavender, Red Fescue and thrift. Numerous species of wintering waterfowl also occupy Killala Bay, most notable are Bar-tailed Godwit and Golden Plover as they are listed on the EU Birds Directive.

The west coast of Mullaghmore Head shows a marvellous range of geological features.

The west coast of Mullaghmore Head shows a marvellous range of geological features.

Copyright of the Geological Survey of Ireland
Enlarge image

To the north of Sligo’s coastline, just shy of the border with Co. Leitrim, is the rocky projection known as Mullaghmore Head. It was formed during the Lower Carboniferous Age, over 300 million years ago. Numerous layers of sandstone can clearly be seen on the exposed rockface, formed from sediment deposited from ancient river deltas. The slopes of Mullaghmore Head are covered with a cloak of grasses and wildflowers, growing on a layer of silt, clay and pebbles that was laid down by glaciers during the last Ice Age.