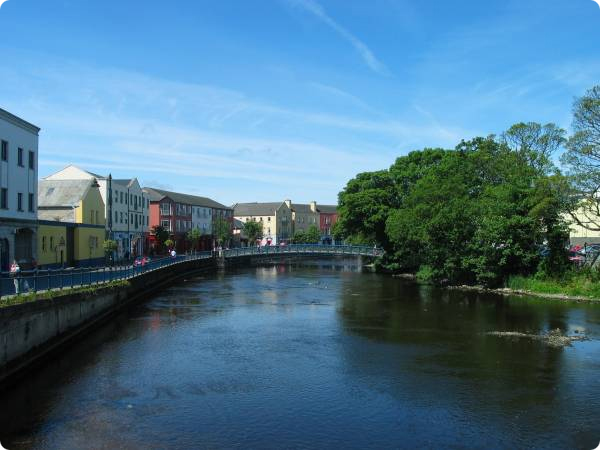 The Garavogue is a small river that originates from Lough Gill. Its name is derived from the Irish “garbh µg” meaning “young rough”. Other rivers in Co. Sligo include: Drumcliffe, Ballisodare, Easkey, Bonet, Owenmore, Unshin, Owenbeg.

The Owenmore catchment area is drained by its three main tributaries: Owenmore, Owenbeg, and Unshin. The Owenmore is a eutrophic, generally flat river and like the Unshin, is also a slow-flowing river. The Owenbeg is a faster flowing river as it has a reasonable gradient and its gravel bed means that it seldom has much pollution.

The area is of much ecological interest due to its diverse habitats and vegetation. Swamp and grassland communities, woodland and calcareous fen all occur a various stages within the Owenmore catchment area. Vegetation includes a variety of sedges, rushes, wet meadows, willow, alder and numerous tall grasses along the rivers edge.

The Robin stays in Ireland all year round. He is about 3 inches high. The robin is a greyish bird with a red breast. You would see the robin usually on the windowsill or in the garden. They are a friendly bird.

The habitat created by trees, bushes and tall grasses along the river channels attracts a diversity of birds, most commonly robins, blackbirds and wrens, followed by goldcrests, redwings, kingfishers and siskins. The deciduous woodland along the river also attracts waterbirds as they are ideal for foraging ground and finding shelter. The most common species include mallard, moorhen, and grey wagtail.

The lakes in the Owenmore catchment hold a considerable population of waterbirds, as will be explored later.