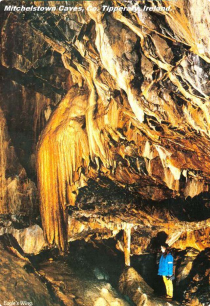 Mitchelstown Cave was discovered in 1833 when a farm labourer dropped his crowbar into the cavern. Expeditions to the cave quickly became popular as news of the discovery spread, and in 1972 it became the first cave in Ireland to be developed for the public.

There are three massive caverns at Mitchelstown, the largest one measuring 51x31 metres with the roof extending to a height of 20 metres. This cave has even been used to host various events due to the great acoustics, including a special concert to mark the Millennium.

Stalactites, stalagmites, calcite columns are some of the formations visible within the various chambers, as well as 350 million year old fossils. These formations take thousands of years to form, making Mitchelstown Cave one of the most impressive features of Co. Tipperary.