The history of the Royal Canal and the Grand Canal stretches back to the mid 1700s. Canals were seen as the way to achieve economic progress through encouraging trade. The Grand Canal was granted permission in 1755, and the Royal Canal was approved shortly afterwards in the 1780s. Today, the canals are mainly used as pleasure waterways.

The Grand Canal travels 82 miles from Ringsend in Dublin to the River Shannon at Shannon Harbour in Co. Offaly and has 43 locks, while the Royal Canal is 146km long with a total of 46 locks. Both canals pass through Co. Westmeath. 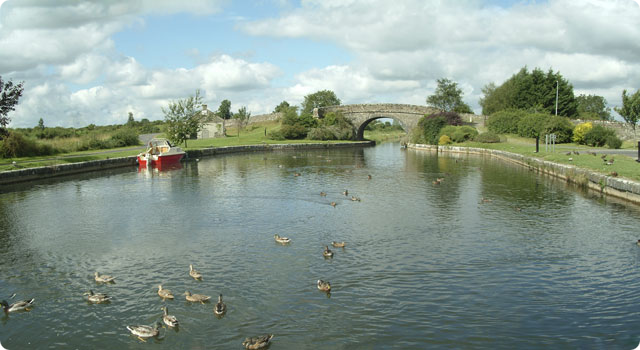 There is a huge variety of habitats along the canals, such as reed and sedge swamps, grasslands, hedgerows, as well as the canal waterway itself where the Yellow Water-lily occurs. They provide shelter and support for a diversity of animals. 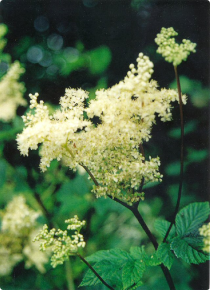 Meadowsweet(Filipendula ulmaria): a wild flowering plant, common to damp parts of woods and meadows. The pale yellow flowers which come out between June and August form clusters. The tiny flowers are each made up of five petals. It was prinicipally used for its antisceptic and fragrant properties. Its old botanical name 'Spirea Ulmaria' gives aspirin its name, as its is one of its ingredients.

Meadowsweet(Filipendula ulmaria): a wild flowering plant, common to damp parts of woods and meadows. The pale yellow flowers which come out between June and August form clusters. The tiny flowers are each made up of five petals. It was prinicipally used for its antisceptic and fragrant properties. Its old botanical name 'Spirea Ulmaria' gives aspirin its name, as its is one of its ingredients.

Reed and sedge swamps are typical of habitats found along the margins of rivers, lakes and canals where the water is slow-moving or still. Common Reed, clubrush, meadowsweet, horsetail and flag iris are all frequent species of this habitat. This is an important habitat that provides shelter for fauna during bad weather and from predators along the canal corridor. The reeds are also a good source of food for birds and insects. Reed and sedge swamps also make ideal breeding ground for birds. Common bird species include moorhens, Grey Herons, and Blue Tits.

Along banks of the canals lie the grasslands, which act as a transition zone between terrestrial & aquatic habitats. Rye Grass, Meadow Grass, and a colourful array of flowers occur during the summer:   meadowsweet, Field Scabious, Ladies’ Bedstraw, Bird’s Foot Trefoil, Ox-eye Daisy. Ash and willow are among the most common tree species along the canal banks, providing shelter for birds such as the kingfisher.

Two species of note that grow along the canalsides in the Westmeath/Offaly area are guilder rose and spindle. While they are common here, they are rare throughout the rest of Ireland.

A common blue butterfly on a native birds foot trefoil

They are one of several land mammals in Ireland. Badgers dig their setts in many different habitats, woodlands and hedgerows are good places to find badger setts.

The Robin stays in Ireland all year round. He is about 3 inches high. The robin is a greyish bird with a red breast. You would see the robin usually on the windowsill or in the garden. They are a friendly bird.

These noisy but tame birds are most common in western Europe. They are typically woodland birds but have adapted well to living in close association with man.

The male of the species sings from usually at top of a large bush or tree. Once you learn its song you will easily locate one

Please see our Transport section for further information on the inland waterways of Westmeath.