If the area of Riverchapel-Courtown is a magnet for tourists thanks to its golden stretches of beach, it is equally attractive to scientists and archaeologists due to its most fascinating natural environment.

The natural history of the Riverchapel-Courtown Harbour area stretches back 500 million years. The coastal cliffs south of the stream at Ballymoney are formed of ash deposits thrown out by Tara Hill volcano around 450 million years ago. Fossils of sea shells found in the local limestone and shales at St Peter’s Headland, Ballymoney, show that they were deposited before the volcanic lava eruption of Tara Hill.

Between 25,000 and 15,000 years ago, a glacier from the Irish Sea covered the area, depositing the clay used in the local Brick and Tile Works (1847-1971). At Ballymoney Strand on the boulder clay and rock outcrops, hoary ragwort reaches its most southerly location in Ireland. Yarrow, rock-samphire, bucks thorn plantain, sea thrift and kidney vetch can also be found on the rock outcrops. Thanks to this interesting variety of plant species, the area is designated an Area of Scientific Interest.

Another area of Scientific Interest lies near the original estuary of the Owenavorrogh River, just north of Courtown. The area is locally known as “the old bar”, where a large gull roost can be observed in winter. The glen is rich in birdlife, including woodcock, jay and sparrowhawk. Along the coast in the large dune complex, sea buckthorn grows abundantly. Other vegetation includes marram, lime-grass, sea rocket and Moore’s horsetail. 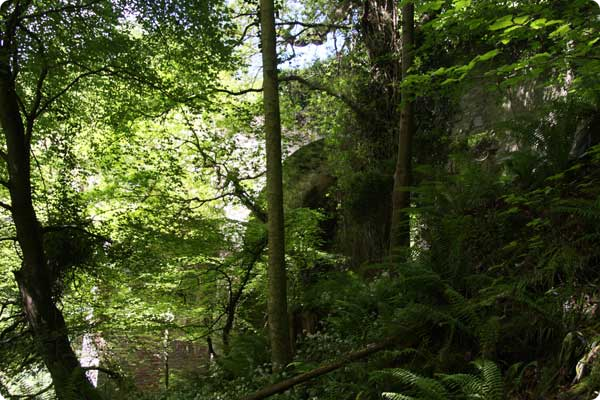 For those that enjoy country walks, there is no nicer place than the restored walks through the woods at Courtown. In the 1870s extensive woods were planted on the Courtown Estate by Lord Courtown. Most of these were cut down in the 1950s and replaced by commercial species such as conifers and ash. Fortunately, a number of the exotic species were retained and can be seen when following the path through the woods.