Energy Use and Security in Ireland 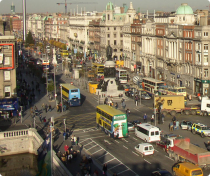 Taking the bus instead of driving is one way of doing your bit to help the environment.The traffic in city centres would be allieviated if more people decided to leave their cars at home.

Taking the bus instead of driving is one way of doing your bit to help the environment.The traffic in city centres would be allieviated if more people decided to leave their cars at home.

Energy consumption accounted for 59% of Ireland’s greenhouse gas emissions in 2019, with the remainder accounted for by agriculture (34%), Industrial Processes & Fluorinated Gases (6%) and Waste (1%) (see image below) (SEAI, 2020). Within energy, transport has by far the largest share, accounting for 42% of final energy demand in 2019, closely followed by heat at 38%. Electricity has the smallest share of final demand, accounting for 20% in 2019 (SEAI, 2020).

Reliance on Oil
Ireland’s oil dependency was the fourth highest in the EU in 2013, with 49% of all energy use derived from oil. All of Ireland’s oil is imported. Prior to 2009 the majority of Ireland’s crude oil imports came from the UK and Norway. Since then the source has become much more variable, with significant imports from North and West Africa, reflecting the global nature of international crude oil markets.

In 2014, 96% of natural gas used in Ireland was imported compared to an EU average of 65%. However, since the Corrib field opened, Ireland has reduced its dependence on gas imports to approximately 33% in 2017. That reliance will rise again however as the flow from these indigenous fields declines. Currently, all of Ireland’s natural gas imports are derived from the UK (Houses of the Oireachtas, 2019).

The fact that Ireland is not endowed with significant indigenous fossil fuel resources and has only in recent years begun to harness significant quantities of renewable resources and more recently natural gas from the Corrib gas field means that it is very reliant on imported energy.

In the past Ireland’s oil and gas was mostly produced in the North Sea and supplied by the UK and Norway; the UK remained Ireland’s largest energy trading partner in 2017. Due to declining North Sea oil and gas production the UK is now a net importer of crude oil, oil products and natural gas. It increasingly sources its energy imports from outside the EU and OECD, and this has a knock on effect on Irish energy security. This trend is expected to continue as reserves of oil and gas from the North Sea continue to decline in the coming years.

Diversifying the fuel mix enhances energy security, particularly where there is an over-reliance on a single fuel source. In this regard, transport is the least secure energy sector, being almost entirely dependent on oil based products, and has the greatest need of increased fuel diversity. Diversification of the electricity generation fuel mix by increasing indigenous renewable electricity production has reduced the demand for imported fossil fuels and the associated exposure to their variations in price (SEAI, 2020). However, major changes in how we source and use energy will continue to be an important factor in Ireland being more energy secure in the future.