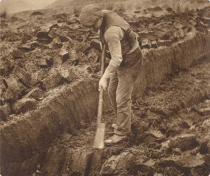 This image of a man cutting turf was taken in 1935 by Dorothy Hartley. It was taken between Athlone, Co. Westmeath and Clonmacnoise, Co. Offaly. Taken from Hartley, Dorothy (1935) Irish Holiday, London, Lindsay Drummond.

This image of a man cutting turf was taken in 1935 by Dorothy Hartley. It was taken between Athlone, Co. Westmeath and Clonmacnoise, Co. Offaly. Taken from Hartley, Dorothy (1935) Irish Holiday, London, Lindsay Drummond.

Non-renewable energy use in Ireland

There have been four commercial natural gas discoveries since exploration began offshore in Ireland in the early 1970s; namely the Kinsale Head, Ballycotton and Seven Heads producing gas fields off the coast of Cork, and the Corrib gas field off the coast of Mayo (DCCAE, 2018). The Kinsale gas field supplied Ireland’s entire gas requirements up to 1994. Since then, we have become almost completely dependent on imported sources.

Today, the main natural gas/fossil gas fields in Ireland are the Corrib gas project and Kinsale Head gas field. The Corrib Gas field is has potential to meet 60% of the Ireland’s annual gas demand at its peak. Since the project has been in full commercial production, indigenous gas has increased dramatically. Production from the Corrib gas field is however expected to taper off significantly in the next couple of years.

While Corrib will greatly enhance Ireland’s security of supply in the short-term, in the medium-to-long-term, post 2020, Ireland is likely to remain largely dependent on imported natural gas to meet demand. Without further gas discoveries Ireland will be importing up to 90% of our gas needs by 2025.

Low international gas prices have affected petroleum exploration worldwide, including Ireland, and may set back exploration in the Irish offshore gas industry, thus making new discoveries in Irish waters less likely within the next five years or so. In light of the climate crisis national declaration and pressure mounting to pass the "keep it in the ground" bill which aims to ban any further oil and gas exploration off the Irish coast, future exploration looks even less likely.  Petroleum exploration in Irish offshore waters is capital intensive and, notwithstanding government incentives of licensing, faces competition for investment partly due to geology and weak prospects of commercial petroleum finds, regulatory requirements as well as environmental and fiscal challenges (Ireland2050, 2015).

Peat in Ireland is used for two main purposes – to generate electricity and as a fuel for domestic heating. Raised bogs, from which peat is largely derived in Ireland, are located mainly in the Midlands. There are two advantages for our use of peat in power generation – the first is economic, the second is related to security of supply. Peat generation creates and supports jobs and investment in the Midlands. It also provides a secure indigenous source of fuel for power that is relatively cost competitive.

Peat causes considerable environmental damage, including high greenhouse gas emissions and other pollutants arising from its use and significant ecological damage to peat bogs. Consequently, Peat as a form of power generation is due to be phased out under current government policy.

Bord na Móna, the commercial semi-state company, responsible for the mechanised harvesting of peat in Ireland will not open any new bogs and is to cease its peat-extraction activities from existing bogs by 2030. To facilitate this transition, Bord na Móna is currently involved in a programme of biomass co-firing replacing peat with biomass (it has been co-firing peat with biomass at Edenderry for more than 5 years), and is also increasingly investing in other renewable energies such as wind. With the closure of two of Ireland's last peat-fired power stations at Lough Ree and West Offaly in December 2020, Edenderry remains the last peat burning plant nationally.

Coal has been mined and used in Ireland over the past four centuries. Because of the availability of more convenient fuels, including oil and natural gas its use is in decline as a fuel in domestic households. However, imported coal is still an important source of fuel for electricity generation, and it also remains an important solid fuel that is still used in home heating by certain households. In order to improve air quality, households in certain urban areas are currently banned from burning so-called ‘smoky coal.’ This ban was extended to all towns with a population of more than 10,000 people in 2020.

Ireland has a single coal-fired power plant at Moneypoint, Co. Clare which is operated by ESB Power Generation. At 915MW output, it is one of Ireland’s largest power stations. Moneypoint is considered to have a useful life until at least 2025 (Department of Environment, Climate and Communications, 2018).

While it is technically possible to replace some or all of the coal with biomass at Moneypoint, there are significant doubts about the economic feasibility of such a conversion at present. Some concerns relate to the cost and availability of sufficient biomass in the medium term and others highlight the additional costs and the impact on electricity prices and security of supply. Importantly, the EU Emissions Trading Scheme was intended to provide a financial incentive to encourage the use of low carbon fuels. However, the price of carbon emission permits is too low to encourage energy producers to switch from non-renewable energy resources such as coal to more sustainable biomass production. If Moneypoint were to be converted to burn biomass at present, it would need to be incentivised, which would have potential knock-on consequences for electricity prices paid by consumers (Ireland2050, n.d.).

Ireland is heavily dependent on oil imports, due largely to energy use in transport. Oil, which includes crude oil and oil products such as diesel and petrol, accounted for 72% of all energy imports in 2019. Being so reliant on imports, we are vulnerable to supply shocks and price volatility. Government policy is therefore to maintain strategic stocks of petroleum products for controlled release during a crisis. Most of our oil imports are in the form of oil products like petrol or diesel for transport purposes, with the remainder imported in crude form and processed at an oil refinery in Whitegate, Co. Cork. While oil has been discovered at the Barryroe oil field off the coast of Cork, it has yet to be commercially produced (Ireland2050, n.d.).

With effect from 1 May 2013, a solid fuel carbon tax has been introduced in Ireland, which applies to coal and peat and is chargeable per tonne of product.