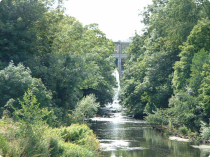 Sustained monitoring and management of our hydro electric stations is an essential part of the process of water conservation.

Sustained monitoring and management of our hydro electric stations is an essential part of the process of water conservation.

Renewable Energy Use in Ireland

In 2018, overall renewable energy supply was 11% of gross final consumption. However, as Ireland has a binding EU target of 16% by 2020 it was not on track to meet 2020 renewable energy targets. In 2018, Ireland had the second lowest progress to meeting the overall Renewable Energy Source (RES) target of all EU Member States (SEAI, 2020).

To date, wind energy has been the most significant source of renewable electricity in Ireland. Installed wind capacity has increased to 5,510 MW across the island of Ireland. Wind generation accounted for 32% of all electricity generated in 2018 (SEAI, 2020).

The growth of wind energy demands modernisation and expansion of the electricity grid. Ireland continues to face challenges to implementing renewable energy in electricity, heat and transport, including predictable and transparent frameworks, regulatory certainty, cost efficiency and effectiveness and social acceptance. In relation to the displacement of fossil fuels by renewable energy, it is estimated that 5.8 million tonnes of CO2 emissions were avoided and €500 million saved in 2019, of which the majority was sourced from wind generation (SEAI, 2020).

Galway Wind Park in Connemara’s Cloosh Valley produces 169MW of electricity and is Ireland’s largest wind farm. The wind farm is expected to produce over 600GWh of green energy each year – enough renewable energy to power more than 140,000 Irish homes, and the energy produced at Galway Wind Park is expected to offset over 220,000 tonnes of CO2 emissions in a normal year. In terms of offshore wind energy, the Arklow Bank, off the east coast of Wicklow, is Ireland's only offshore wind farm at present (25 MW),

Waves that travel across the North Atlantic Ocean generate enormous amounts of energy travelling towards to the west coast of Ireland. The energy that could potentially be captured from tidal sources vastly exceeds Ireland's current electricity requirements. The Sustainable Energy Authority of Ireland’s Wind and Ocean Energy Roadmaps suggest a potential for up 30GW of offshore wind and a further 29 GW of wave/tidal energy in Ireland’s surrounding waters. This compares with today’s peak electricity demand of above 5GW in Ireland (EirGrid, 2019). Harnessing this renewable energy means that Ireland has the opportunity to be a global leader in the wave energy sector due to its geographical location.

With the operation of the Ocean Energy Development Strategy also in place, Ireland could further increase the breadth and depth of its investment in research and innovation, whilst also reducing its reliance on fossil fuels and create a renewable energy resource. Wave energy converters already exist off the west coast of Ireland. Commercialisation of tidal energy remains a challenge owing to technological difficulties however. Despite this challenge, Strangford Lough, Co. Down boasts the world's first commercial tidal stream power station. The 1.2MW tidal electricity facility was constructed in 2007 and is powerful enough to provide electricity to up to 1,000 homes, illustrating that commercialisation of tidal energy is a viable near-term possibility for Ireland. In 2012 the project reached the production of 5GWh, allowing enough energy required to power 1,500 homes.

The International Energy Agency predicts ocean energy being predominant in 2030 with growth accelerating up to 2050. Ireland’s 2015 White Paper and the Offshore Renewable Energy Development Plan makes provision for the potential of offshore energy (wind, tidal and wave) in the future as technology improves and it becomes more cost competitive.

Since 2010, solar PV has been the fastest growing power generation technology worldwide. However, to date solar PV installed capacity in Ireland is amongst the lowest in Europe. In 2018, approximately 16.7 GWh of electricity was generated from solar PV, representing 0.1% of renewable electricity.

SEAI estimates show that there were 24.2 MW of installed solar PV capacity in Ireland in 2018: 17.7 MW in the residential sector and 6.5 MW in the commercial/industrial sector (SEAI, 2020).  In spite of its small contribution in 2018, solar PV is growing significantly. As of mid-2018 there were 245 MW of installed capacity contracted for connection to the transmission grid and by the end of 2019 this had increased to 706 MW. There is also likely to be continuing growth in the residential sector due to the renewables requirement in building regulations for new dwellings and also due to the introduction of a capital grant for domestic solar PV in existing dwellings (SEAI, 2020)

Passive solar design is an increasingly effective means of benefiting from solar radiation, whereby simply designing a house so it faces south, capturing as much sunlight as possible, can reduce energy bills by more than 10%. Similarly, a well designed solar hot water system can provide around 50-60% of the annual hot water needs for homes and buildings in Ireland. In fact, one square meter of solar panel provides the same amount of hot water as the equivalent of more than 100 litres of oil, and is effective even when the sky is overcast or cloudy.

Biomass comes from living or recently living organic material. The primary source is plant material such as trees, crops and grass. Animals that directly or indirectly consume plants are also considered as biomass. Only approximately 3.5% of the energy we use in Ireland comes from Irish grown biomass.

There are several reasons for this relatively low biomass use for power generation in Ireland, including the comparatively expensive price and limited availability of indigenous biomass, high import costs and its inconvenience in comparison to other fuels, such as oil and gas. To this end, a secure and financially affordable supply is necessary for large-scale biomass use. This would require incentives for landowners and power users, as well as the establishment of a new large-scale processing industry in Ireland.

Many central and northern European countries use district heating systems, whereby a community’s hot water and heat needs are supplied from a central source. Powering these systems through a centralised biomass-fired co-generation of electricity and heat is therefore highly efficient. Ireland's limited number of district heating systems and our low population density means that the initial costs of installing such a system and the subsequent heat losses could be much higher here than in our European counterparts.

Nonetheless, developing our biomass resources would contribute to achieving more sustainable heat sources. By 2035, the SEAI predicts that the bioenergy potential in Ireland will be close to 30% of 2015 energy demand.

Hydro electricity in 2018 accounted for 2.2% of Ireland’s gross electrical consumption (SEAI, 2020). In Ireland, the biggest dammed power stations (over 20MW) are Ardnacrusha on the River Shannon, Ballyshannon on the River Erne and Poulaphuca on the Blessington Lakes.

Norway, Sweden and Austria have large hydropower electricity generation facilities because their geography is suited to the construction of dams and hydroelectric plants. As there is no fuel involved, once the construction costs of the dam have been factored in the marginal cost of hydropower is very low. Ireland's natural resources of hydropower at Ardnacrusha on the Shannon along with the hydropower stations on the Erne, Lee and Liffey are now fully exploited and provide the backbone of our original electricity system. With the sustained expansion of our electricity system however other energy resources were needed to meet our electricity needs (Ireland2050, n.d.).

There are currently two municipal waste-to-energy plants in Ireland, one based in Duleek, Co. Meath, and a second in Poolbeg, Dublin. The facility in Duleek is operational since 2011 and has capacity to manage 224,000 tonnes of residual waste per annum with a capacity to generate 17 MW of electricity. The incinerator in Poolbeg has a capacity to treat 600,000 tonnes per annum of non-hazardous municipal and industrial waste. The plant generates enough electricity to power 100,000 homes, and could potentially provide district heating to the equivalent of another 50,000 homes. More information on the Poolbeg Waste-to-Energy facility can be found here.