Our Planet
© Department of the Environment, Community and Local Government

Global climate change is the biggest environmental problem the human race has ever had to address. If it is not addressed, it has the potential to destroy organised human life on Earth, as more and more places become uninhabitable due to sea-level rise and extreme temperatures. The impacts of climate change are already being felt, and billions more people will be exposed to extreme weather and environmental stresses if warming continues unabated.

See the separate section on climate change for more information.

In 1997, the international community, through the United Nations, agreed a Convention to tackle the problem and later strengthened that convention with a Protocol that was negotiated in Kyoto, Japan whereby developed countries undertook to limit their emissions of greenhouse gases. As a result of that Kyoto Protocol Ireland committed to limit its emissions to an annual average of 62.8 million tonnes over the period 2008-2012.

The Kyoto Protocol did not do enough to limit emissions of greenhouse gases, as emissions continued to increase the international community agreed further reductions in emissions in 2015, in Paris. The Paris Agreement is a legally binding international treaty on climate change, which commits to limiting global warming to well below 2, and preferably 1.5 degrees celsius. It builds on the Kyoto Protocol bringing all nations into the cause of taking required climate action while providing enhanced support to countries in the Global South in order to succesfully do so.The agreements central aim is to increase the global response to ensure that global temperature is kept well below the set limit of 2 degrees celsius in order to combat the threat of climate change adequately. The agreement also aims to improve the ability of countries to deal with climate change impacts. Further information on key aspects of the agreement can be found here. 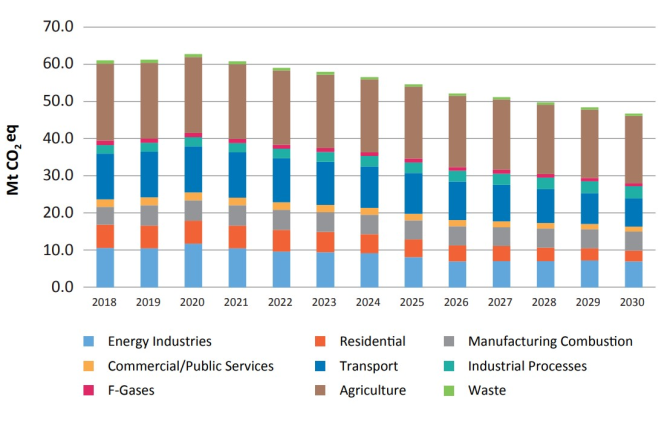 Ireland has breached its annual obligation target since 2016. This shows that we are missing our targets and will continue to miss them unless change is implemented. Current policies set to 2020 will not be sufficient in meeting our 2020 emission reduction targets. Per capita, Ireland's emissions are very high when compared to countries such as China and India.

The graph shows the latest historic and projected emissions for CO2 only under the With Additional  Measures scenario. The graph depicts the extent of the challenge in meeting our obligations when our emissions are currently rising, and we are not reaching our targets.

Challenges for the Future 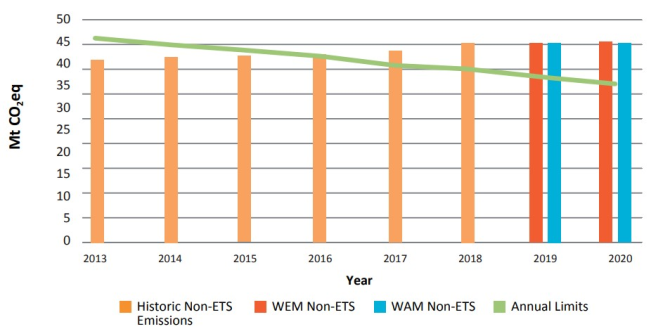 In 2020, on the 5th anniversary of the Paris agreement, EU leaders agreed to cut emissions by 55% compared to 1990 levels, an increase from the previous target of 40%. This ambitious target is needed in order to keep global temperature rise to below 1.5 degrees celsius.

As the figure above illustrates, Ireland has exceeded our annual emissions limits each year since 2016, highlighting the urgency required to address the problem.