Fracking is shorthand for "hydraulic fracturing". It refers to how rock is fractured apart by a high pressure mixture to release gas, usually shale gas. Shale gas refers to natural gas that is trapped within shale formations. Shales are fine-grained sedimentary rocks that can be rich resources of petroleum and natural gas.

Modern day fracking began in 1940s when Stanolind Oil and Gas began a study on the relationship between oil and gas production output, and the amount of pressurized treatment being used. This study lead to the first experiment of hydraulic fracturing, which occurred at the Hugoton gas field in Grant county, Kansas in 1947. On March 17, 1949, Halliburton conducted two commercial experiments; one in Stephens county Oklahoma, and another in Archer County, Texas.

After achieving experimental success in 1949, fracking quickly became commercialized. In the 1960s Pan American Petroleum began using this drilling technique in Stephens county Oklahoma, and since then it has become widespread in the US and Canada.

More information on fracking can be found on the LiveScience website.

How does it work? 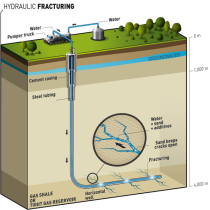 Fracking involves drilling down into the earth before a high-pressure water mixture is directed at the rock to release the gas inside. Water, sand and chemicals are injected into the rock at high pressure which allows the gas to flow out to the head of the well. The injected mixture takes the place of the gas, with the aim of avoiding subsidence.

The process is carried out vertically or, more commonly, by drilling horizontally to the rock layer. The process can create new pathways to release gas or can be used to extend existing channels.

Fracking can be dangerous and has been linked to contamination of water supplies.

Previous - Chemicals
Next - Fracking in Europe