The level of recycling of municipal waste continues to grow from year to year in Ireland with almost all households and businesses now using a green bin. However, the organic recycling rate is still low and there is much room for continued improvement.

The latest Waste Packaging Statistics for Ireland indicates that we have met all EU targets for recovery and recycling of packaging waste in 2017. Of the total waste generated (983,380 tonnes), 86% was recovered and 66% was recycled.

2017 is the first year that Ireland generated over 1 million tonnes of packaging waste (EPA, 2019). 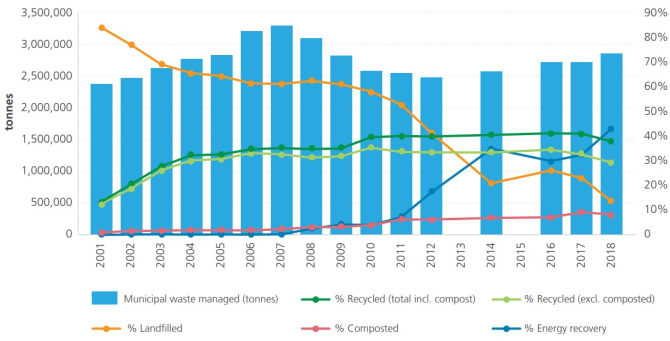 The graph shows management of municipal waste in Ireland since 2001, note the dramatic decline in landfilling over this period accompanied by increased levels of recycling in the early 2000s and subsequently an increase in the share of municipal waste sent for energy recovery since 2011.

Previous - Other Types of Waste
Next - Infrastructure